The CST Polaris Xtremeplus team, best of the Italians in the stage: P10 for Michele Cinotto, and P18 of the overall for his son Pietro.

Mission accomplished for all the four crews that arrived in Jeddah, with Umeda being the first Japanese to finish the rally in Side by Side.

Stage 12 – BISHA –JEDDAH
It takes a team to finish the Dakar Rally and Marco Piana and the Xtremeplus team is proud to have all the four crews at the end of the hardest rally in the world.

The skills of the drivers and navigators of the four crews together with the experience, the professionalism and the human touch of the Xtremeplus team made this adventure possible.

« The Dakar Rally is a race, but also a dream and we are here to share this human adventure. Xtremeplus is more than a team. It’s a family », says the team owner Marco Piana. So, it is not a surprise that at the start of the 44th edition of the Dakar there were two families. 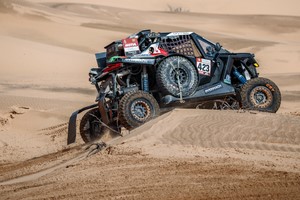 In the race among the race, today Cinotto sr finished ahead with a superb P10 at the end of 12th special stage, that was not easy at all. Cinotto jr followed with a well deserved 11th place that allowed him to finish in P18 of the overall.

« We are really satisfied of our result today and the position of the overall, that makes us the best Italian crew in the category », said Pietro. « We had a good start and if it was not for the mechanical issue we had on ss5, we could have had a result that reflects more out potential », said Michele, 10th today and in P43 of the overall. 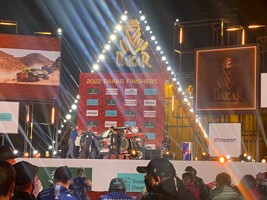 It was mission accomplished also for the Jean Claude and Jerome Pla. Today they had a difficult day (P44) that doesn’t reflect their performance. Thanks to their consistency, in fact, father and son are 29th in the overall in their first Dakar.

« I’m really happy. This is a dream come true. My personal goal was to finish the Dakar and we made it. I want to that the Xtremeplus team and my navigator David Giovannetti », said Shinsuke Umeda – Motul Polaris Xtremeplus, P32 in the stage and 33rd in the overall in his debut year.

Umeda did not only did a great job but he is the first Japanese to have finished a Dakar on a SSV.