Hero MotoSports Team Rally, the motorsports team of the world’s largest manufacturer of motorcycles and scooters – Hero MotoCorp, achieved a good result in the first stage of the Abu Dhabi Desert Challenge with all three riders finishing within the top 10 positions.

Franco Caimi led the team and finished the stage in third position. He got into a good rhythm from the start and was within the top 3 throughout the stage.
Joaquim Rodrigues rode a measured stage to complete in the seventh position. Sebastian Buhler was able to overtake some riders ahead of him and from there on he navigated perfectly to complete the stage in eighth place.

In the overall rankings, all three riders are inside the Top 10 with Caimi retaining his fourth place while Buhler climbing up two positions to eighth, just behind Rodrigues in the seventh position. 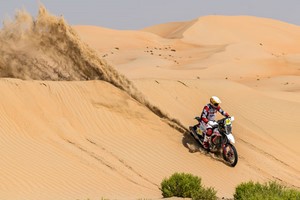 The first stage comprised entirely of dunes and sandy sections, and was a preview of the terrain to come in the next stages. Starting from the city, the riders covered over 366kms, including 262kms of racing before finishing at the bivouac in the desert. Coming up is the longest stage of the rally, at 333kms in length, with an additional 137km of liaison sections.

Joaquim Rodrigues, Rider, Hero MotoSports Team Rally: « Today was a tough stage for me. I was feeling low on energy today, but I was able to push through and finish the stage. I will use the night to recover my energy, and I am looking forward to a better day in the second stage. »

Franco Caimi, Rider, Hero MotoSports Team Rally: « It is my first time in this desert yet I found a good rhythm on the bike and was able to deliver a good first stage. The bike is working perfectly, so I am happy and motivated for Stage 2. » 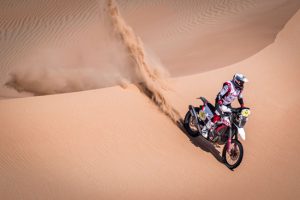 Sebastian Buhler, Rider, Hero MotoSports Team Rally: « The first stage gave a good taste of how the coming stages will be. I started towards the front and felt good on the bike and soon caught up to the riders in front. From there, I was opening the stage. Even though that may have cost me some time, but I was comfortable and navigated well, so looking forward to the next stage. »