Both Red Bull Off-Road Junior Team crews crossed the finish line to complete an eventful week at Rallye du Maroc. There were stage wins aplenty for the team but mechanical misfortune on the dunes meant they could not add to their wins in Andalucia and Kazakhstan earlier in the year.

Cristina Gutiérrez (ESP) and co-driver François Cazalet (FRA) arrived in Morocco leading the T3 category of the FIA World Cup for Cross-Country Rallies. The duo had driven their OT3 to victory at the Andalucia Rally in May to give the Red Bull Off-Road Junior Team their first-ever race win. Gutiérrez and Cazalet followed up this result with victory at Rally Kazakhstan in June.

The win in Kazakhstan was particularly hard earned with Gutiérrez taking the chequered flag despite injuring herself on the final stage. The Spanish racer underwent a prolonged period of recovery after breaking three vertebrae during that final stage in Kazakhstan. 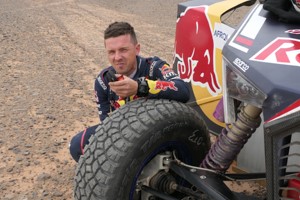 It was all the more remarkable then when Gutiérrez raced out of the traps in Morocco on her return to rally-raid, just four months after Kazakhstan. Gutiérrez and Cazalet set the fastest time in their category on the first two long desert stages at Rallye du Maroc and led the T3 category with just two stages remaining. In fact, so impressive was their pace that they set the 8th fastest time of any vehicle on Stage One.

« We were at the front battling with all the big teams in the side-by-side category, this is very positive. » – François Cazalet

Then trouble struck on Stage Four – the penultimate day of the rally – as 130 kilometres into the day’s racing Gutiérrez’s OT3 suffered transmission issues. Gutiérrez and Cazalet were towed back to the bivouac and their chances of a third consecutive rally win were gone. They did however dust themselves down and set the fastest T3 time on the fifth and final stage of the rally. 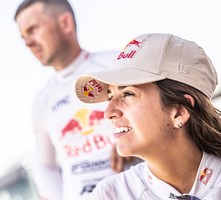 The crucial championship points accrued for stage wins in Morocco mean that Gutiérrez and Cazalet maintain their lead of the T3 category of the FIA World Cup for Cross-Country Rallies going into next month’s Abu Dhabi Desert Challenge.

« After leading the classification throughout the rally it was not the result we expected… I want more, to continue and above all to enjoy. See you in Abu Dhabi. » – Cristina Gutiérrez

When the going got tough on Stage Four, Gutiérrez and Cazalet were supported by team-mates Seth Quintero (USA) and co-driver Dennis Zenz (GER). The Red Bull Off-Road Junior Team crews pulled together to do everything they could to get their race leading OT3 going again.

« At this rally we showed that our hard work since Dakar is paying off. » – Dennis Zenz 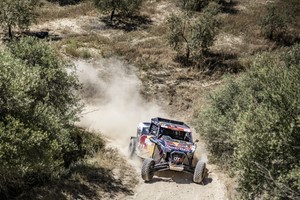 Quintero and Zenz had got their own Rallye du Maroc off to the best possible start by winning last Friday’s 11-kilometre prologue stage. Then came a tough couple of days at the rally for the teenage American and his German companion. Despite being out of contention for the overall win, this duo once again showed their pace on Stage Three to set the fastest T3 time and register themselves as the 12th quickest overall that day.

The remarkable performance on Stage Three saw Quintero and Zenz start at the back before overtaking 59 vehicles while eating dust all day.

« We were just going for it and it was pretty gnarly. My co-driver’s navigation was on point. » – Seth Quintero

With two crews at the finish line and over 2,500 kilometres more on the clock for each OT3, the Red Bull Off-Road Junior Team have taken another huge step towards the next Dakar Rally. The team set the fastest T3 time on every stage of Rallye du Maroc except one as momentum continues to build ahead of the big one in January. 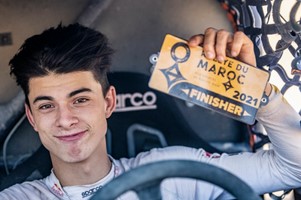 The team will be back in action at the Abu Dhabi Desert Challenge (November 6-12) with Gutiérrez and Cazalet looking to close out overall victory in the T3 category of the FIA World Cup for Cross-Country Rallies. 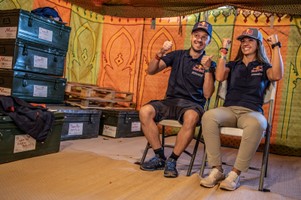 Cristina Gutiérrez: « We have finally managed to finish Rallye du Maroc. After leading the classification throughout the rally it was not the result we expected due to the breakdown in the penultimate stage. Yesterday was a hard day. At 130km the gearbox broke and we couldn’t continue.
« Today we started last with all our desire to score a few points and continue as leaders of the championship. I stay with the positive, it was my first Rallye du Maroc and I felt at home, being very consistent and with a good rhythm, finishing every day in very good positions in the general classification. I want more, to continue and above all to enjoy. See you in Abu Dhabi. »

François Cazalet: « The first target was to win Rallye du Maroc and take the maximum points for the championship. The week was full of promise, our team progressed a lot in the car, collaboration, navigation and driving skills. We were at the front battling with all the big teams in the side-by-side category, this is very positive. On the final day the target was to win the stage and we did it. » 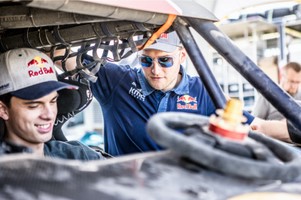 Seth Quintero: « We got on an awesome run today and we were really cruising along. We were up by a couple of minutes. Then we got stuck with 60km to go. When we got going again we made up close to six minutes. We were just going for it and it was pretty gnarly. »

Dennis Zenz: « Now we’ve finished the rally and we are quite happy. Seth and myself improved our collaboration in the car and the navigation was always on point. At this rally we showed that our hard work since Dakar is paying off. As a team we showed our speed. For sure there are things to improve, but generally we are quite happy. A big thank you to our mechanics who have been working day and night to give us the best possible car. »