Monster Energy Honda Team have passed the pre-Rallye du Maroc scrutineering and are now officially cleared to start tomorrow’s race, a new edition of the traditional rally across the Moroccan Sahara desert. 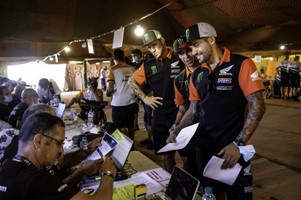 The administrative and technical checks prior to the Rallye du Maroc took place at the Tizi bivouac on the outskirts of the town of Zagora, in the south of the country. Monster Energy Honda Team made it through the various checks without any setbacks and now have the go-ahead to get the rally underway. The team’s four riders: Ricky Brabec, José Ignacio Cornejo, Pablo Quintanilla and Joan Barreda, also took the opportunity to study the route of the eleven-kilometre prologue that will be held tomorrow afternoon some 13 kilometres from the bivouac.

The race route will cover a total of 2,681.61 kilometres, including 1,633.33 kilometres of timed special stages. Each day will start and finish from the same bivouac in Tizi, although there will be some 1200 kilometres of liaison sections to cover too. Essentially, the special stages will be raced in two major areas, the Erg Chebbi and Erg Chegagga, with a considerable amount of off-piste racing, but will also feature a fair share of dunes and mountain tracks. 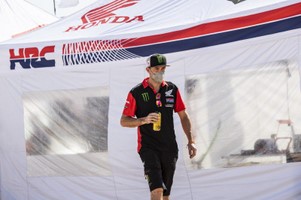 Ruben Faria – General Manager : « It is great that we are here at the Rallye du Maroc. The organisers have battled hard to get the race running and the important thing is that the rally will be held with all the necessary safety measures for COVID-19. For me, the Rallye du Maroc is the most important race of the year after the Dakar and serves as preparation for the forthcoming Dakar. Our four riders and almost the entire team will be taking part, so it will be a good time to put ourselves to the test and grease the machinery. The aim is to come away from here with as many kilometres of special stage under our belts as possible and with the riders in perfect shape. It’s a decisive race for our preparation ahead of the most important objective of the year. »