Even before the event, Tom Coronel was well aware that a top result would be rather difficult with 60 kilograms of additional weight on board following his recent success. Nevertheless, he kept the damage relatively limited in the fourth race weekend of the TCR Europe Series at the Spa-Francorchamps circuit in the Belgian Ardennes. With the Audi RS 3 LMS in DHL livery, run by Belgian team, Comtoyou Racing, he finished tenth in both races and at least scored championship points as a result. 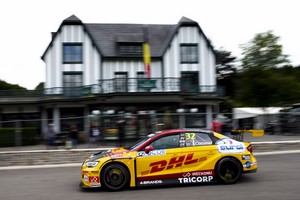 « In the practice sessions, I already noticed that it would be difficult wit that weight, » Coronel reported. « After Zandvoort, where I had won, the weight was adjusted in line with the ‘balance of performance’ and I had 60 kilograms extra on board as the only one of the Audi drivers. One Audi had no extra weight at all and the other two Audis had 30 kilos, but I had twice that! Especially at a long circuit like Spa, with uphill and downhill parts, that is costing just a little too much time and that became apparent, among others with the tyres that started having a hard time after about four laps with all that weight. It was just too much to keep up with the guys at the front. In qualifying, I missed out on tenth place by just 0.008 seconds, which would have put me on pole position for the race with reversed grid order for the first ten, but unfortunately, that just didn’t work out… »

Both races were held on the support package of the annual 24-hour race at Spa-Francorchamps. The first race was run in dry conditions on Friday. « I had a good start, was able to keep up quite well and had some nice battles, among others with a Hyundai and an Audi, some nice racing after which I eventually came home tenth, » Coronel said. « Of course, that isn’t quite where I want to be. I was stuck behind Callejas, a Spanish Honda driver, who was fiercely defending. I just wasn’t able to attack because he slightly pulled away under accelerating out of the corners every time, so that I just was too far off. That cost me quite a bit of time. » 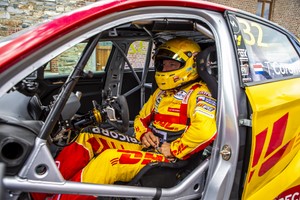 For the second race, held on Saturday, conditions were very changeable, nothing unusual at Spa-Francorchamps. Coronel said: « There was a downpour as the cars were already on the grid, so that immediately led to the usual chaos among the teams and everybody around. I started with slicks at the front and rain tyres at the rear, known as the ‘Coronel combination’ in TCR ever since I once won a race like that in Japan. It went well. We had a rolling start behind the safety car. In the opening stages, I got some damage to the front of the car, but thankfully, I was able to continue. On the opening lap, I ran a little bit too wide in the double left-hander and slightly lost ground to the cars in front of me as a result. I drove a slightly solitary race in tenth place, was able to close up a bit, but tenth place was all I could achieve. Let’s say that I have been able to keep the damage limited, which was the goal. »

The next two TCR Europe Series races will be held at the Nürburgring, 2 and 3 September. A fortnight earlier, 21 and 22 August, Coronel will be competing in the next two FIA WTCR – World Touring Car Cup races at the Hungaroring where his new Audi RS 3 LMS will no longer be in camouflage livery, but in the familiar yellow-and-red colour scheme instead.