Frenchman Mathieu Serradori and Botswana’s Ross Branch are firmly on track to record maiden victories in the car and motorcycle categories at Rally Kazakhstan, after the penultimate selective section of 308.80 kilometres that looped through the remote Mangyshlak Peninsula, north-east of Aktau, on Saturday. 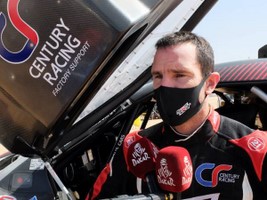 With one stage to go before the finish of the second round of the FIA World Cup for Cross-Country Rallies and the first phase of the FIM Cross-Country Rally World Cup, Serradori and French navigator Loic Minaudier now have an overnight lead of 22min 53sec in the car section in their Century CR6 Buggy. Branch heads Austria’s Matthias Walkner by 4min 05sec on two wheels.

« First position today and I am very happy, but it was a fast track and the dunes were extremely difficult, » said Serradori. « I had a good feeling in the car and Loic did a good job. »

Serradori was coming under increasing pressure from Saudi Arabia’s Yazeed Al-Rajhi over the last two days and the gap was just 22 seconds at the start of the day. The Saudi pushed his Toyota Hilux hard through the opening kilometres, was fastest at the early splits and had taken a virtual overall lead of the rally when he sustained a front-right drive shaft breakage and got stuck in soft sand after the onset of rain on the day’s stage. 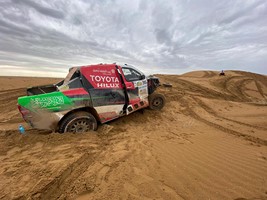 While Yazeed and German co-driver Dirk von Zitzewitz were attempting to dig themselves free, Sebastien Halpern’s MINI came over the dune and collided with them. The Saudi’s problems lifted Overdrive Racing team-mate Lucio Alvarez back into second place, although Al-Rajhi did manage to get going again with the loss of 58 minutes and still holds fourth overall. Halpern lost 40 or so minutes in his own right but was already out of contention for the podium.

« Today was very good and nice to drive, sandy tracks and dunes, » said second-placed Alvarez. « We had good navigation, some little mistakes, but we finish P2. I am happy. »

Despite the wet and tricky conditions and a delay in the dunes late on, Denis Krotov displaced X-raid MINI team-mate Matthias Ekström and moved up to third overall and the Swedish motor sporting all-rounder slipped to fifth after Al-Rajhi’s recovery. Frenchman Ronan Chabot was sixth, but Czech driver Miroslav Zapletal hit trouble and lost his place inside the top 10.

Despite being out of contention for the overall win after his tyre mousse issues, American rider Skyler Howes scaled the top step of the day’s podium again with the fastest time of 3hr 26min 48sec on his Husqvarna. 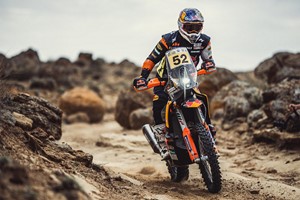 His success made little difference to the overall leader board, where Branch was fourth quickest and may have done enough to hold on for the outright victory on the final day. He was beaten by Matthias Walkner and Daniel Sanders and takes a lead of 4min 05sec over Walkner into the final morning, the African having the advantage of being able to follow the Austrian through the closing stage.

Walkner said: « It was really fast again. I gave it my all but the pace is so high. It is crazy and 60-70% of the stage it was raining. I tried to make no mistakes. You can see the line quite good so the gaps are not that big. »

Third on the day, Sanders said: « We started off on some fast tracks and we could see some clouds coming over and we had a bit of rain from 30km in to all the way to the finish line. It was hard to see at some times when we were travelling at 140-150 (km/h) and the rain is coming through the goggles. After the refuel, we hit some sand dunes and made some time back after losing some time in the morning. »

Opening the way proved costly for Sam Sunderland and the Briton was seventh on the day, dropped nearly 12 minutes to the leaders, and held fourth in the overall standings behind Adrien van Beveren. All 12 riders completed the leg but Andrew Short survived a small crash that damaged his navigational tower. 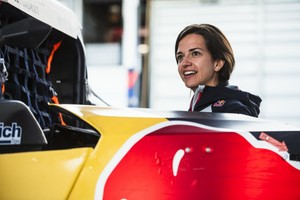 Alexsandr Maksimov recovered well from the 90-minute time loss he sustained on the third stage removing wire fencing that had become entangled in his rear wheel and crushed his rivals on the day in the quad category. But the damage had already been done for the Russian and Argentina’s Manuel Andujar will take a lead of 26min 25sec over Poland’s Rafal Sonik into the final day.

Cristina Gutierrez guided her OT3-by-Overdrive to what could be a decisive stage-winning performance to consolidate her lead in the FIA T3 section. The Spaniard and French co-driver François Cazalet hold a comfortable lead of 39min 57sec over Pavel Lebedev, after the Russian hit trouble on the day’s stage and ceded 36 minutes to the OT3 crew. Fernando Alvarez lost third place to fellow Spaniard José-Luis Pena Campo.

In the FIA T4 category, Eugenio Amos earned his third stage win of the campaign and beat Austin Jones by 4min 10sec, but the American has managed his pace to perfection after a superb start to the rally and the Monster Energy Can-Am driver holds a lead of 34 minutes after four stages. Dutchman Kees Koolen retained third in another South Racing-built Can-Am.

Sunday
The scenic final stage of 267.02km runs along the Caspian shoreline to the north of Aktau City and loops in an anti-clockwise direction around the western tip of the peninsula. 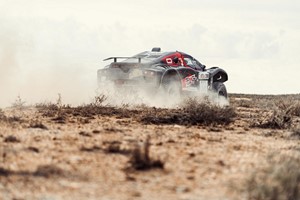 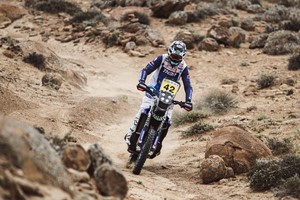 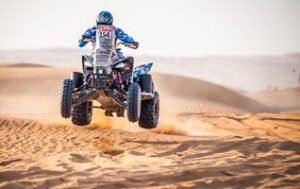