Overdrive Racing’s Yazeed Al-Rajhi and co-driver Michael Orr were pushing hard and topping the virtual stage times at the Sharqiyah International Baja Toyota when they suffered an accident after 82km of the morning’s first 217.50km desert selective section in Saudi Arabia’s Eastern Province.

The Toyota Hilux rolled in the incident, Al-Rajhi was taken to hospital via helicopter for treatment and Orr was transferred by ambulance with both suffering from back pain, thus prematurely ending their involvement in the third round of the 2021 FIA World Cup for Cross-Country Bajas.

Dutchman Erik van Loon and his French co-driver Sébastien Delaunay crewed the second of the Overdrive Toyota Hiluxes and reached the finish in fourth place after losing time on the longer of the day’s stages following a navigational delay. 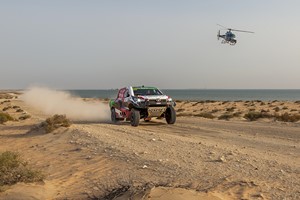 Outright victory fell to Saudi Arabian driver Yasir Seaidan, who also takes the lead in the FIA Bajas series and the Saudi Toyota Desert Rally Championship after its opening round.

Al-Rajhi and Van Loon began the event cautiously and settled into third and sixth positions after the opening 10km qualifying stage that was held in the Half Moon Bay area on Thursday afternoon.

Adverse weather conditions forced race officials to abandon Friday’s itinerary. Strong winds caused a sand storm and the safety helicopter was unable to fly. An initial morning delay resulted in the cancellation of the day’s action for bikes and quads and the decision was later taken to cancel the stage for the FIA cars when the poor weather conditions continued into the afternoon.

To ensure that at least 75% of the competitive distance was used to qualify for FIA championship points, crews tackled Friday’s original stage of 217.50km early on Saturday morning and then repeated the first 138.50km to PC2 after the bikes and national cars had completed their first and only pass.

It was 82km into the first stage where Al-Rajhi’s hopes of retaining his Sharqiyah Baja title ended with his Toyota Hilux lying inverted in the sand after the accident. Al-Rajhi had been the fastest driver on the stage up until that point.

Action in the 2021 FIA World Cup for Cross-Country Bajas resumes with the Jordan Baja on March 18-20. 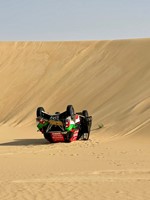