The 38th time at the finish is no longer what we are used to from Tim and Tom Coronel in the Dakar 2021. Still, the tenth stage was not a ‘bad day’ for the twins. They did have a bit of bad luck in the form of a puncture and they had to drive a little more carefully to prevent even more. « That was a small handicap, but if a flat tire is our biggest problem this week, then I can live with it, » says Tom at the finish of the 342 km long stage. 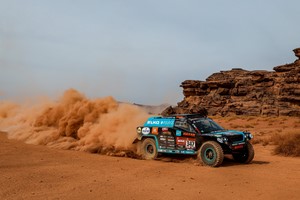 The stage from Neom to Al-Ula was another one of beautiful canyons and vast plains. The first means ‘stones’, the second means ‘dust’. And those two ingredients caused the lesser day for Tim and Tom Coronel in terms of results.

The puncture was caused indirectly by the once again refusing tire pressure system. It was therefore not possible to set the rear tires harder or softer from inside the car. « At the start we put the tires at 1.3 bar, but that was far too little on the stones, so we had a puncture, » says Tom. « The spare tire was at a good 2 bar, which was just a bit too much, so we had to drive carefully because we only had one spare tire left. » 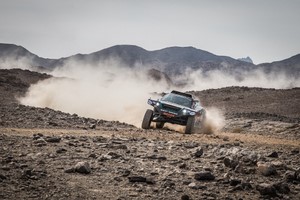 At the neutralization at 204 kms in the stage – where the participants had to overcome 30 kms on the asphalt and had a mandatory stop – Tim and Tom were able to get new spare tires and put the tires on the correct pressure.

« At 1.8, 1.9. That was enough. »
In the first part of the stage, The Beast was stuck in the dust of the trucks a few times. « Kamaz in particular, » says Tom. « When it passes – and they were just faster on that part – you don’t see anything at all. Then you have to slow down, to avoid accidents. We saw two cars that were as flat as a dime. »