The Monster Energy Can-Am Team is the operation to beat at the half-way point of the gruelling 2021 Dakar Rally in the Kingdom of Saudi Arabia.

As teams take advantage of a much-needed day of rest in the north-central city of Ha’il, the four Monster Energy Can-Am Maverick X3s are classified in first, second, sixth and 15th places among what started out as a massive 44-strong line-up of production lightweight vehicles in the new SSV T4 category. 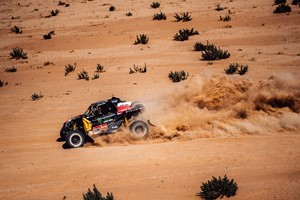 Polish driver Aron Domżala won the fourth stage and has never been outside the top three since the Prologue in Jeddah on January 2nd. He and navigator Maciej Marton finished third, fourth, seventh, first, fourth and fourth on the six demanding desert stages that took teams from Jeddah and through the southern Saudi deserts, via Bisha, Wadi ad-Dawasir, Riyadh, Al-Qaisumah and on to Ha’il.

With Chilean rival Francisco Lopez dropping over an hour on the last stage before the rest day following an accident on a sand dune, that misfortune lifted Domżala into an outright 40-second lead over Monster Energy Can-Am team-mate Austin Jones.

Speaking after the demanding fifth stage, the leading Pole said: « The last three stages were for tourists compared to that stage. It was really technical with hard dunes and tricky navigation. We’re in a great battle with Chaleco (Lopez). In the dunes he has incredible speed but there are still a lot of stages to go. » 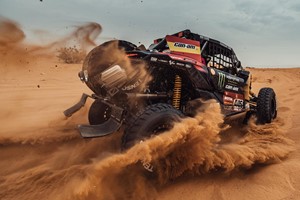 Young American Jones and his Brazilian co-driver Gustavo Gugelmin crew the second of the four Monster Energy Can-Ams. Jones was the early leader of the rally after winning both the Prologue and the opening stage to Bisha. He slipped to fifth after stage two and moved up to second overall on the sixth test after running in third for the last three days.

Brazilian Reinaldo Varela and Spaniard Gerard Farrés are taking part in the third and fourth of the Monster Energy-backed Can-Ams and hold sixth and 15th at the rest day with their respective co-drivers Maykel Justo and Armand Monleón. 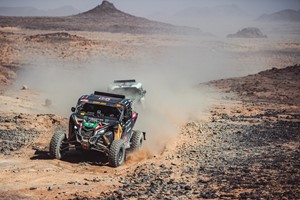 Varela had been running as high as fourth overall after SS1, but navigational problems cost him valuable time, as did a minor accident. Farrés climbed as high as third overall after stage two, but the Spaniard lost two and a half hours on stage five and the second quickest time on the stage into Ha’il was the former enduro rider’s best return thus far. Electrical issues and a fuel problem have also plagued the Spaniard, but the team rectified the fuel issue in time for the Spaniard to record his impressive sixth stage time.

Monster Can-Am Team’s Scott Abraham said: « This has been a dominant display from the Monster Energy Can-Am Team. Once again, it has been phenomenal to watch all the drivers fighting at the front of the field. Aron and Austin have put on a fantastic show and are separated by mere seconds. Definitely the second week will be challenging. With memories of the first week of Dakar 2020, with extreme conditions, there could still be another factor with the weather coming into play.
« There is a long way to go, but the team’s in really good shape and Reinaldo is still in with a shout. Unfortunately, because of the fuel issues we had earlier, Gerard is on the back foot. But he has done a phenomenal performance to charge from the back of the category on Friday to take second on the stage. We are all looking forward to a strong second week and, hopefully, to bring all the cars to the podium in Jeddah. » 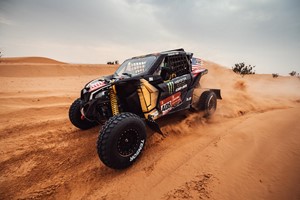 The Dakar Rally resumes on Sunday with a selective section from Ha’il to Sakaka, as the route winds its way through the cooler northern deserts during the second week, taking in additional night halts in Neom, Al-Ula and Yanbu before the finish in Jeddah next Friday. 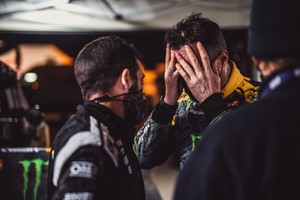