It was hard work for The Beast in the third stage of the Dakar 2021. And therefor also for Tim and Tom Coronel. In the 403 km loop near Wadi Ad-Dawasir, they were faced with a particularly varied landscape, which demanded the utmost from man and machine. « We moan sometimes, but this is what we are here for, » said Tom. « This is the real thing. » 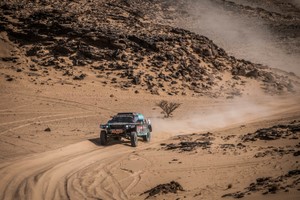 For Tim and Tom it was, as they said, ‘a great day’, but they encountered a lot of misery along the way. Maurik van den Heuvel’s truck lying upside down in a dip in the dunes, Bernhard ten Brinke’s Toyota on its side after it somersaulted. Not things that make you happy, especially if you still have a long way to go. « We also had a warning twice ourselves, » said Tim. « The dunes were really big ones, where you had to push very hard to get to the top. And on the other side super steep downwards again. Those descents were really intense. A little too late and you are launched. We landed on the nose twice. Luckily it went well, but after that I drove up a little more diagonally. The trucks can’t, but we can. It is unnatural though, because you have to look to the side to have an overview instead of ahead. »

Other parts of the stage were very fast, but also mean. « Navigation was difficult, and the speed made it even more difficult, » said Tom. « I made a small mistake, but it didn’t have much of an impact. It doesn’t matter anyway, 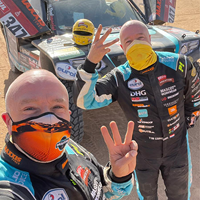 because we are also there for the stories. We have a cool car, self-built, but we can’t join the competition. When we do our thing, we are among the best in the second rank, but for the top we lack speed – even though we hit 160 a few times today, but then The Beast jumps all over the place. It would be nice to compete for the top, for the competition, with a really fast car. But then we have to stop filming during the stages, and other things. But I do believe that with our experience we could do well for the top 10, 15. »

For now, the top 20 remains the goal. With 33rd place in the stage, 57 minutes behind stage winner Nasser Al-Attiyah, Tim and Tom were not dissatisfied. « We are still driving », Tim laughed. « Not everyone can say that. It was a beautiful day. We are pleased. »