The first stage of the Dakar 2021 was a nasty one from the start. Everywhere Tim and Tom Coronel saw cars with damage, punctures and other misery. The brothers themselves strolled quietly through. No mistakes, no problems, and The Beast didn’t flinch either in the tricky stage from Jeddah to Bisha. 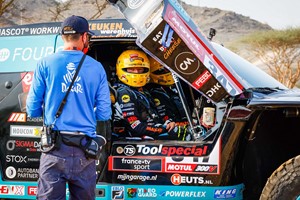 By simply driving slowly but steadily, and staying out of trouble, Tim and Tom arrived at the finish of the 277 km long special stage with the 39th time, 45 minutes behind stage winner Carlos Sainz. That could have been a little better, but also much worse. « I got out of the car twice to film, » said Tom. « We stood with Erik van Loon, for example, who had suffered a lot of damage by hitting a stone. »

The misery of others was a warning to the Coronel brothers. « We had to get used to the stage for a while and find our rhythm, but that might have been our luck, » said Tim. « There were many cars in trouble. With that knowledge, for example, we didn’t try to overtake a few cars in front of us, although they held us up a bit. We took it fairly easy and only at the end I did kick The Beast’s ass. » 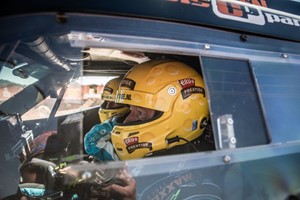 By that time they dared to take that risk, according to Tom. « The temperatures remained good, we didn’t have a single puncture, we didn’t get lost, nothing. Then the pace can be increased a bit, with the finish line in sight. Such a first day is good for confidence. We are ready to attack. We’ll just crawl forward, you will see. »