As announced previously, the crews of Carlos Sainz/Lucas Cruz (both ESP) and Stéphane Peterhansel/Edouard Boulanger (both FRA) will line up in the two MINI John Cooper Works Buggies at the Dakar 2021 in Saudi Arabia.

As well as long-term partners like Red Bull, the X-raid team is pleased to announce a strong new partnership for the Dakar 2021, with STC*. The Saudi Arabian digital and telecommunications company will be prominent on the two MINI JCW Buggies, which will show a totally new design. Fans will get their first glimpse of the new design in action at the Hail Bajas 1 and 2, which are taking place in Saudi Arabia in the middle of December 2020. Despite the COVID 19 crisis and the limited opportunities for testing as a result of the pandemic, the engineers at X-raid have still managed to make substantial improvements to the Buggy. Among other things, this allowed them to analyse and optimise many components, in order to further reduce the overall weight. Furthermore, suspension geometry and the set-up have also been optimized.

Sainz and Cruz travel to Saudi Arabia as defending champions. The pair were triumphant in January, presenting X-raid with its fifth victory at the Dakar. For Sainz, this was win number three at the iconic desert rally. One of his fiercest rivals in the battle for overall victory will be team-mate Peterhansel. The Frenchman is starting a Dakar alongside his new co-driver Boulanger for the first time, but the pair have already enjoyed a fine result at the warm-up rally in October. With 13 Dakar victories to his name, Peterhansel can call on a vast wealth of experience. 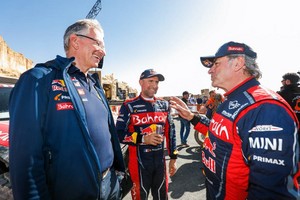 Sven Quandt, X-raid team principal: « Preparations have been completed at our headquarters in Trebur, and the majority of the equipment is now in Marseille, from where it will be shipped to Jeddah. We can hardly wait to get started at the Dakar 2021. The route looks very promising. Our main goal is obviously to defend the title. To achieve this, we once again line up with some strong and experienced pairings. Not only is the MINI JCW Buggy capable of challenging for the win, but also the drivers in the four-wheel drive MINI JCW Rally. Despite the restrictions we have had to live with this year, we have developed and improved both models. »

Carlos Sainz, reigning Dakar champion: « I am ready for the Dakar, both mentally and physically, and the MINI JCW Buggy is also working very well. This will be my third Dakar in a MINI, and we have improved from year to year. Of course it is possible to win again – but you get nothing for free at the Dakar. I definitely feel fast enough to challenge for the win. »

*STC: Saudi Telecom Company is a Saudi Arabia-based digital company and a pioneer in the field of digital technology, which has always focussed on innovation and evolution. STC offers a variety of ICT solutions and digital services in several categories, including telecommunications, IT, financial technology, digital media, cybersecurity, and other advanced digital solutions.