Following several months of testing and high-profile launch events, Goodyear has finalised the specification of the unique treaded tyre that will be used in the exciting new PURE ETCR electric touring car championship when it gets underway next year.

A valuable testing programme with teams, series promoter Eurosport Events and the technical department at WSC Group has provided valuable feedback for Goodyear after revealing the specially developed Goodyear Eagle F1 SuperSport race tyre in August. Featuring a treaded design, the single tyre specification will be used at every track in all weather conditions – rain or shine, and on a calendar comprising permanent and street circuits.

Goodyear, the Founding Partner of PURE ETCR, has completed several test sessions to gather data not only for its own development work, but also to provide teams and manufacturers with a reliable and stable platform for their own preparation with the world’s most powerful electric touring cars. 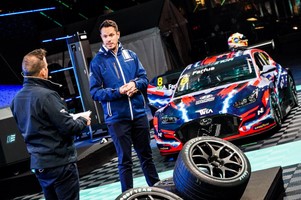 Goodyear’s PURE ETCR and WTCR – FIA World Touring Car Cup projects are led by event leader Sebastian Trinks: « We have another test at Vallelunga this week, and then the testing programme will continue early next year, when there will be more cars and manufacturers on track, to give us more data and information. The tyre itself is finalised. We haven’t changed anything since its reveal in August, because it has performed exactly as expected. We’ve had very positive feedback from the teams’ test drivers, too.

« When the R&D team in Luxembourg and Germany was working on the tyre earlier in the year, they had a good window to do indoor testing and simulations while we couldn’t go out on track due to lockdown. We managed to complete a lot of the testing work in this period, to minimise the amount of work that needed to be carried out on a race track. It was a good example of adapting to the situation and making the most of the circumstances while we couldn’t travel, so an excellent job from the R&D team. » 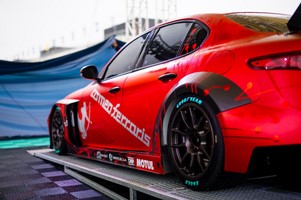 Suspense builds with high-profile launch events
Additional details about PURE ETCR have been showcased at two events in recent months; a launch in Copenhagen in October, and an on-track debut at MotorLand Aragón in November. The series’ unique starting gates and Energy Station were revealed for the first time at these launch events, building excitement for next year’s debut season. Goodyear’s partnership has taken centre stage, including through interviews with Ben Crawley, Goodyear Director Motorsport EMEA.

Goodyear enjoys a close working relationship with Eurosport Events, which not only promotes PURE ETCR but a number of other top-class championships, including WTCR, for which Goodyear became the exclusive tyre supplier this year. Because of this familiarity and collaboration in a number of championships, Goodyear’s team is able to support the progression of PURE ETCR very closely.

Trinks adds: « It certainly helps that we work with the same team for PURE ETCR as in WTCR. It’s good for both sides – for the championship and for us – to have that same point of contact and to build close relationships. We’ve been delighted with the results in our first season as WTCR tyre supplier this year, and the feedback from Eurosport, teams and drivers has been overwhelmingly positive. »

Italian racer revealed
Another exciting development from the Aragón launch event was the reveal of another ETCR car, the Alfa Romeo Giulia ETCR developed by Italian outfit Romeo Ferraris. The Alfa Romeo is the second completed ETCR car, following the Hyundai Veloster N ETCR which has so far carried out all the PURE ETCR testing work this year. 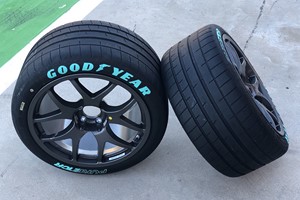 Trinks adds: « We know the Romeo Ferraris team already because they run Alfa Romeos in WTCR, so we have worked with them this year and got on very well. I’m happy to welcome the second car to be unveiled, and I’m looking forward to a good collaboration. We’ve been working closely with Hyundai so far throughout the testing programme, and look forward to working more closely with CUPRA as they continue their development work. It’s great that all of these teams and manufacturers are positive about PURE ETCR and we’re enjoying working with every one of them. »

Michela Cerruti is Romeo Ferraris’ Operations Manager and the project leader for the Alfa Romeo Giulia ETCR programme. After a season working closely with Trinks’ team in WTCR, she is excited to continue this collaboration as PURE ETCR development progresses.

« Goodyear is a reliable partner and they have a great experience in motorsports with almost every kind of car, » Cerruti says. « Their return in the TCR world with WTCR will be a good base for the ETCR development and, for road tyre development, ETCR is a nice test for tyre manufacturers. For sure, having them in this adventure will be a motivating challenge to reach good performance and develop the car during the upcoming tests. »