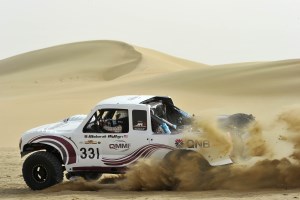 Competitors from 17 nations will tackle five demanding selective sections across the Qatar deserts on February 23rd-27th. Al-Attiyah heads a three-car Toyota team that should be challenging for overall T1 honours at the top of the leader board.

Qatari drivers feature in both the T1 and T3 categories, with Mohammed Al-Meer seeded at four in his powerful Chevrolet Buggy and teaming up with Ukrainian navigator Dmitry Tsyro. Abdullah Al-Rabban also features in T1 in a Jeep with Russian co-driver Igor Chudaykin.

A new QMMF Team has entered a quartet of Can-Am Maverick X3s and a Polaris RZR 1000 Turbo in the hotly-contested T3 category that has attracted 11 teams. Khalid Al-Mohannadi drives the Polaris alongside the experienced French navigator Sebastien Delaunay, while Mubarak Al-Hajri, Ahmed Al-Kuwari, Rashid Al-Mohannadi and Mohammed Harqan drive the Can-Ams. 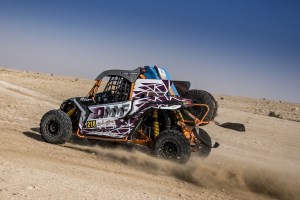 Al-Hajri is a veteran of numerous rounds of the FIA Middle East Rally Championship and cross-country rallies, both as a co-driver and a driver, and returns to action with Frenchman Laurent Lichtleuchter. Qatar-based Manuel Luchesse and Portugal’s Pedro Santos team up with Al-Kuwari and Rashid Al-Mohannadi and Slovenian Vili Oslaj partners Al-Harqan and will be using hard signals to guide his driver.

Former FIA T2 World Champion Adel Abdulla also makes a welcome return to the championship after missing the latter part of the 2019 season. He teams up with Frenchman Jean-Michel Polato in the T3 category.

Other competitors are taking part from as far afield as the USA, Hungary, Poland the Netherlands and Belgium, but the duo of Gonzalo Guayasamin and Ricardo Torlaschi have travelled the furthest to take part in the T3 section in a Polaris RZR 1000. The driver hails from Equador and his navigator has travelled from Argentina to cross the Qatar deserts for the first time. 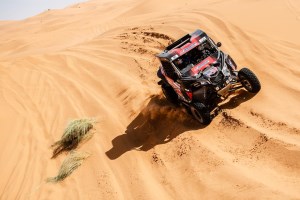 The sole entrants in the T4 section are the American duo of Austin Jones and Kellon Walch in a Can-Am Maverick X3 entered by South Racing.

Manateq – Economic Zones Company is the title sponsor for the third successive season. Established in 2011, the company is positioned as a vital component in achieving the economic development goals of the Qatar National Vision 2030, through providing premium infrastructure within strategic economic zones to promote the logistics and industrial sectors in Qatar.