Saudi Arabia’s Yazeed Al-Rajhi extended his outright lead in the Sharqiya Baja to 3min 03sec with the fastest time on the modified second selective section of 197.18km on Friday.

The Toyota Hilux driver beat two-time Dakar Rally champion Carlos Sainz by 3min 02sec on the competitive route that had been shortened after recent rain in the desert regions of the Kingdom’s Eastern Province. At the wheel of his X–raid MINI JCW Buggy, Sainz finished the stage 2min 12sec up on ED Racing’s Essa Al-Dossari, who climbed to third overall in his Nissan Navara.

The fourth quickest time saw Abu Dhabi Racing’s Sheikh Khalid Al-Qassimi hold a similar position in the overall standings in his Peugeot 2008 and Czech Miroslav Zapletal finished the stage in fifth after Yasir Seaidan – Al-Rajhi’s rival for the Saudi Toyota Desert Rally Championship – roiled the second of the MINI Buggies. The Saudi’s accident and damage sustained to the car means that Al-Rajhi now has an unassailable lead in the Drivers’ Championship. 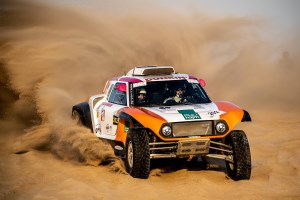 Saleh Al-Saif was the class of the T3 field in his Can-Am and held sixth overall, the Saudi able to extend his category lead over Zimbabwe’s Conrad Rautenbach to 19min 39sec.

With numerous crews hitting trouble on the challenging special, Farhan Al-Muharib found himself catapulted into seventh overall and the lead in the Nissan-dominated T2 section for series production cross-country vehicles. Eighth-placed Khalid Al-Hamzani was 3min 49sec adrift and second in the category with Yousef Al-Suwaidi holding third and 11th overall.

Nazel Al-Shammeri was ninth in the overall standings and Omar Al-Lahim rounded off the top 10. There were time losses for Saleh Al-Abdelali (Hummer) and Ahmed Al-Malki (Nissan) and hefty time penalties for several drivers, including Ahmed Al-Shegawi, Faris Al-Shammeri and Sami Al-Shammeri.

Yousef Al-Dhaif hit the front in the NUTV section with the fastest time in his Can-Am and headed into the night halt 2min 06sec in front of Fahad Al-Naim. 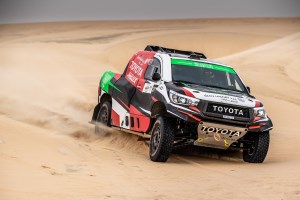 Haysham Al-Haysham guided his Honda to the fastest time and a surprising 45-second outright lead over Mishal Alghuneim in the motorcycle class. Anas Al-Ruhyni was third, but Emirati overnight leader Othman Al-Ghufeli slipped to fourth place.

Abdulmajeed Al-Khulaifi remained on course to clinch the quad championship title by setting the quickest time to hold a lead of 18min 04sec over Ahmed Al-Harbi. Al-Khulaifi’s main series rival Riyadh Al-Oraifan climbed to third to make it a Yamaha 1-2-3, but will be relying on the leader failing to finish if he is to stand any chance of claiming the inaugural title.

The event is being organised by the Saudi Automobile and Motorcycle Federation (SAMF), under the chairmanship of H.R.H. Prince Khalid bin Sultan Al-Abdullah Al-Faisal and the supervision of former FIA Middle East champion Abdullah Bakhashab. 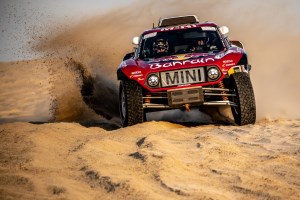 The new Baja runs with the support of the Saudi Automobile and Motorcycle Federation, the General Sport Authority, Abdul Latif Jameel Motors (Toyota), the MBC Group, Al-Arabia outdoors and the Saudi Research and Marketing Group. It is also being observed as an official candidate for future inclusion in the FIA World Cup for Cross-Country Bajas. 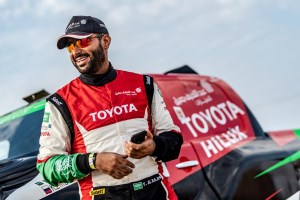 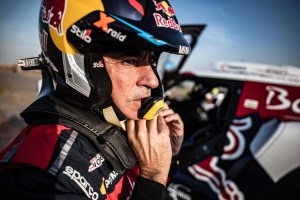