– Saudi’s Al-Rajhi lines up with Chabot, Van Loon and Khoroshavtsev

Overdrive Racing and Toyota Gazoo Racing South Africa will field one of their strongest ever line-ups for the Rally of Morocco, the final round of the FIA World Cup for Cross-Country Rallies, on October 3rd-9th.

The joint team is planning to run eight Toyota Hiluxes in the demanding five-day desert finale to the FIA World Cup, which will also see the team’s Nasser Saleh Al-Attiyah take a nine-point lead in the championship to a final event showdown with Dakar legend and three-time Morocco winner Stéphane Peterhansel for the FIA World Cup title.

Four of the Hiluxes will feature Toyota Gazoo Racing branding. Al-Attiyah teams up with French co-driver Matthieu Baumel to head the entry, the Qatari knowing that outright victory would give him the FIA World Cup title for the fifth time since his maiden success in 2008. So far this season, Al-Attiyah has taken wins in Qatar and Kazakhstan, but did not take part in the Abu Dhabi Desert Challenge. 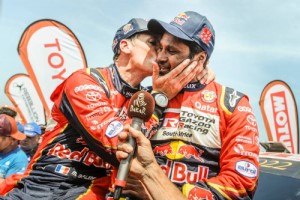 Al-Attiyah has taken five successive victories in Morocco. He said: « Morocco is one of my favourite rallies and it takes on even more importance this time. This rally will decide the FIA World Cup and a season of work, while we also carry out a big desert test with the cars for the Dakar Rally. »

The other three Toyota Gazoo Racing South Africa cars will be in the hands of former Dakar winner Giniel de Villiers, Dutchman Bernhard Ten Brinke and two-time FIA Formula One World Champion Fernando Alonso, who makes his debut on a full FIA event after recent testing in Poland, South Africa and Qatar and an appearance in the Lichtenberg 400, the fifth round of the South Africa Cross-Country series in mid-September.

The experienced De Villiers finished ninth at the Dakar Rally earlier this year, but has a run of consistent podium finishes and is a three-time former winner of the Rally of Morocco. He teams up with Spaniard Alex Haro. 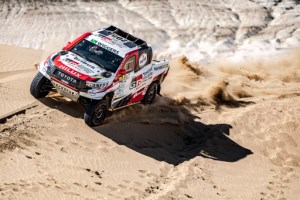 Ten Brinke was the winner of the Moroccan event with Al-Attiyah’s co-driver Baumel in 2011. On this occasion he lines up with Belgian Tom Colsoul, the defending FIA World Cup champion co-driver.

Alonso will be relying heavily on the experience of his co-driver Marc Coma for a first real taste of competition in the Moroccan dunes. Coma was a five-time winner of the Dakar Rally on two wheels and was, until recently, working with the ASO to organise the route for the Dakar Rally.

Four further Toyotas have been entered by Overdrive Racing with several customers also running the V8-engined machines. Yazeed Al-Rajhi could still finish as runner-up in the FIA World Cup with victory in Morocco and other results going his way. The Saudi will be keen to gain as many kilometres behind the wheel of his Toyota before the Dakar heads to his homeland in January 2020. With usual co-driver Dirk von Zitzewitz sidelined through injury, Ulsterman Michael Orr steps into the breach to navigate the Riyadh driver.

Frenchman Ronan Chabot finished 10th overall with Overdrive Racing at the 2019 Dakar Rally and he teams up with Gilles Pillot in a second car. Dutchman Erik van Loon lines up with Frenchman Sebastien Delaunay in the third Hilux and the Russian duo of Viktor Khoroshavtsev and Anton Nikolaev crew the fourth Overdrive car. 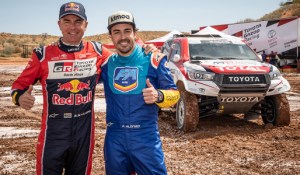 Overdrive Racing’s Jean-Marc Fortin said: « We were not at the recent Jordan Baja because of the size of the team line-up we have in Morocco. I am very happy because we have a full programme of testing different things in Morocco between (September) 28 and 3 (October). Both Toyota Gazoo Racing and Overdrive Racing are all on board for this and the rally in Morocco.
« We are hoping for a very positive test session in that period before we start the rally. We will test a new set-up for the suspension and a few different things, but we will keep this quite secret. The whole team together, we will have around 60 people involved and on board. It is interesting that everyone is there, except Vladimir (Vasilyev), who has not finished the FIA World Cup for Cross-Country Bajas just yet. He will be back with this in Portugal. »

Pre-rally formalities will take place in the town of Fes before the start podium at 15.00hrs on October 4th at the Fes stadium. The event then transfers to the desert with the opening leg on October 5th offering two selective sections of 103.46km and 225.70km en route to the bivouac in Erfoud. 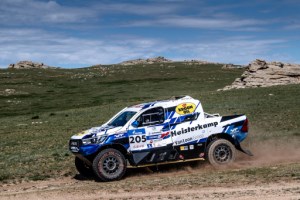 Day two of competition on October 6th loops through the deserts around Erfoud and offers a competitive section of 386.49km. Three timed stages of 79.80km, 210.80km and 72.38km are planned for another loop of Erfoud on October 7th and day four features another Erfoud loop of 408.53km on October 8th. The final selective section of 168.47km passes between Erfoud and the finish in Fes on October 9th.