Poland’s Jakub Przygonski and German co-driver Timo Gottschalk overcame the hurdle of being first on the road and avoided trouble to secure victory in the Jordan Baja by a winning margin of 3min 50sec on Saturday.

The Mini All4 Racing driver held off a determined challenge from Argentina’s Orlando Terranova over the fourth selective section through Wadi Rum to keep his hopes of winning the FIA World Cup for Cross-Country Bajas well and truly alive.

Terranova managed to pass series leader Vladimir Vasilyev to claim second position, but his Russian rival maintains a one-point series lead to take to the final round in Portugal after rounding off the podium places. Mini All4 Racings filled the top three positions on the first ever FIA cross-country championship podium in the Hashemite Kingdom. 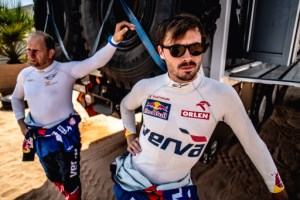 Przygonski said: « We were pushing. Tricky navigation, but the stage was good for us. We enjoyed the terrain here – stones, sand and camel grass. It is a good place to make the race. It would be nice to come back. This is a great result and keeps us in the frame for the championship. »

His frustrated Argentine rival said: « I think we were very close to Kuba (Przygonski) but, in one stupid place on the road, I turn and I hit on the front. One kilometre more and I had a puncture and I stopped. After that, I started thinking about the points. It was a very nice race. We had punctures and some problems with the navigation. »

Unofficially, the win gives Przygonski 30 valuable points to take his tally to 109, while second place lifts Terranova to 111 and Vasilyev now has 112 points to take to the Portugal showdown.

Abu Dhabi Racing’s Sheikh Khalid Al-Qassimi finished fourth overall in his Peugeot 3008 DXR and Saudi Arabia’s Yasir Seaidan rounded off the top five in his Mini All4 Racing, despite finishing the stage on a rear-left puncture. But the Saudi failed to clock into Parc Ferme and relinquished his finishing position. 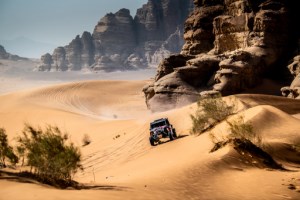 Russia’s Fedor Vorobyev dominated the duel with Italy’s Michele Cinotto for T3 Trophy honours and duly finished fifth overall behind the four Minis and the Peugeot.

The Can-Am driver began the final stage 1hr 02min 16sec in front of the Italian and romped home to claim the win and extend his series lead to 22 points heading to the final round. Saudi Arabia’s Saleh Al-Saif was a distant third in T3.

Hungary’s Balazs Szalay reached the finish in sixth overall in his Opel Grandland X and Mohammed Al-Twijri moved up to seventh at the expense of Cinotto and ninth-placed Guy Bitton.

Romania’s Claudiu Barbu was the last FIA car in the stage in his frantic bid to reach the finish and continue his quest to upstage Latvia’s Aldis Vilcans in the fight for T2 honours in the category for series production cross-country vehicles. Unfortunately he retired and gifted the title to his rival. Saudi Arabia’s Muneef Al-Salmani was forced to take the road section back to Aqaba and retired.

Dubai’s Mohammed Al-Balooshi started the final morning with a massive advantage on two-wheels and the KTM 450 Rally rider secured an emphatic victory by the margin of 1hr 15min 36sec with another stage win in a time of 2hr 45min 17sec. 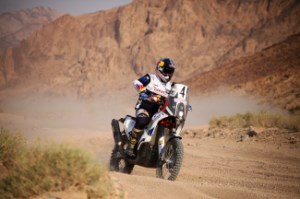 A delighted Al-Balooshi said: « It was great. From the beginning it was full gas. We rode the reverse of yesterday, so there was not much navigation, just checking every now and then. I really enjoyed the terrain. It was really amazing. I feel like it was a good investment on my part to come here because, in four months time, we race Dakar. This should be very similar to the Dakar. Now we celebrate my birthday. It was on Friday! »

Kuwait’s Abdullah Al-Shatti and Al-Balooshi ‘s brother Sultan were locked in a tense tussle for second place throughout the final stage. Only 48 seconds separated them at the start of the day but Al-Shatti held on to claim the runner-up position on his KTM after a frantic duel with his Emirati rival. Jordan’s Abdullah Abu Aisheh and Abdullah Bosmaf finished fourth and fifth.

Saturday – as it happened
Penalties were imposed on several riders and drivers at the overnight halt. Mohamed Al-Balooshi saw his lead in the two-wheel category extended to 1hr 04in 44sec after Abdullah Al-Shatti was handed 31 minutes of penalties for route violations.

Each of the other riders also incurred penalties, but the only retirement was defending champion Ata Al-Hmoud. He had been taken to hospital for medical checks after a crash near the end of the second stage and the decision was taken not to continue. Hamzeh Al-Zawahreh also retired before the restart. 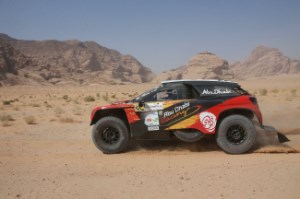 Yasir Seaidan incurred the wrath of the FIA Stewards for arriving at the end of the third stage with one spare wheel missing and the Saudi was handed a 10-minute penalty. Kuwait’s Meshari Al-Thefiri withdrew his Nissan Patrol after a troubled Friday.

All six National Baja runners were given nine hours of time penalties for failing to complete SS2 and start SS3, but only four continued into Saturday. Hassan El-Kheid and Saif Rumman both retired.

Al-Balooshi was the first rider into the 210.85km selective section that was a reverse run through Friday’s opener. The leader headed off into the distance, as his brother Sultan began to challenge Al-Shatti in the battle for second place.

Przygonski opened the road for the cars, as Terranova set his sights on catching Vasilyev and snatching second place away from the Russian. The leaders stayed clear of trouble and held station through the first half of the stage, although Terranova managed to close in on Vasilyev.

Al-Balooshi stayed clear of trouble to secure an emphatic victory on two-wheels and Przygonski overcame the disadvantage of opening the road for the cars to snatch a narrow victory from Terranova and Vasilyev. 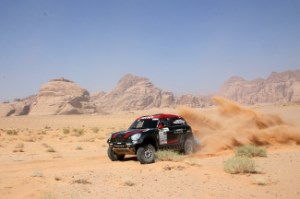 The 2019 FIA World Cup for Cross-Country Bajas concludes with the Baja Portalegre in Portugal at the end of October. 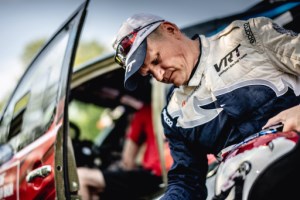