There’s nowhere in the world that freshly crowned 2019 Dakar Rally champion Nasser Al-Attiyah would rather race next than in his native Qatar. That’s why it’s no surprise to see the three-time Dakar winner leading the list of entrants for this week’s Manateq Qatar Cross-Country Rally.

The six-day rally-raid event is the opening round of the 2019 FIA World Cup for Cross-Country Rallies. Al-Attiyah and his French co-driver Mathieu Baumel are jumping back in their Toyota Hilux and aiming to maintain their recent winning streak. « This is my home event and that is always special. » – Nasser Al-Attiyah

Despite their recent dominance at the Dakar, Al-Attiyah and Baumel will be taking nothing for granted in Qatar. At last year’s rally they took a 15-minute lead into the final day of racing, but engine trouble on the final stage saw victory snatched away from them. The reigning Dakar champions know that they will have to be on the top of their game for nearly 1,500km if they are to emerge with the win this time around.

« I have a good record here, but last year shows that anything can happen. » – Nasser Al-Attiyah 12 months ago it was MINI driver Kuba Przygonski who took the chequered flag in Doha. The result set the Polish racer on his way to winning the 2018 FIA World Cup for Cross-Country Rallies. Przygonski returns to Qatar, this time with Timo Gottschalk of Germany as his co-driver. Gottschalk was Al-Attiyah’s co-driver for the Qatari’s first Dakar win in 2011.

« I’m pleased to announce that in the new cross-country season, the extremely experienced Timo Gottschalk will sit in the co-pilot’s seat. » – Kuba Przygonski

While the crowds in Qatar will be out in force to cheer for Al-Attiyah, they will also have a number of other local drivers to support. Among these will be Mohamed Abu Issa, who will drive a SMG Buggy alongside Frenchman Xavier Panseri. Abu Issa enjoyed a distinguished quad bike racing career, including a fourth place finish at the 2014 Dakar Rally, before switching to the car category. 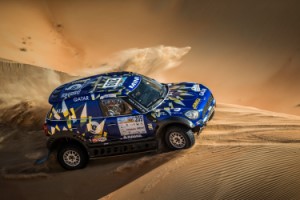 The international class field of competitors in Qatar will be introduced to fans at a ceremonial start on the iconic Pearl-Qatar on Thursday, February 21. The following day plays host to a 102km prologue stage before the action goes deep into the dunes for the next four days.

The total distance to be covered in Qatar is 2,059km, with 1,367km of the route against the clock. It will be a gruelling test of the drivers and their machines with only the best of the best able to park on the final podium on Tuesday, February 26.

Quotes
Nasser Al-Attiyah: « This is my home event and that is always special. It is a very difficult event and throws up numerous challenges. I have a good record here, but last year shows that anything can happen and we need to be fully focused from the start to give ourselves the best chance of winning. » Kuba Przygonski: « I’m pleased to announce that in the new cross-country season, the extremely experienced Timo Gottschalk will sit in the co-pilot’s seat. Timo is a talented co-pilot and wants to win the Dakar again, and also help me to defend the World Cup. I’m convinced that we will achieve our aims. We would like to thank Tom Colsoul for three very successful seasons for us. »