For the second time this season after his earlier success at Circuit Paul Ricard at the end of May, Tom Coronel has won a race in the TCR Europe Series. At the Nürburgring, where the series was part of the support package of DTM for the third time this year, Coronel started from pole position with the Audi RS 3 LMS in DHL livery, run by the Comtoyou Racing team. He led all the way from lights to flag and crossed the finish line as the undisputed winner. As a surprise, his son Rocco, who had accompanied him, was allowed to hand over the winner’s trophy to his father after the race. « Another win, number two in the pocket, a great feeling, » a buoyant Coronel said afterwards. 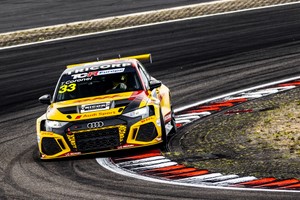 At the Nürburgring, Coronel had an almost new car at his disposal, the car raced by Stian Poulsen at Norisring at the beginning of July, but never driven by Coronel yet. « So far, I had one car I raced in both FIA WTCR and TCR Europe Series, » he explains. « The team changed the engine and the gearbox every time because these parts are sealed. For TCR Europe Series at Norisring, where I raced in FIA WTCR at Vila Real the same weekend, we got a second car that I now raced because my WTCR car is in the container for transport to the Middle East where we will have the final two WTCR weekends in Bahrain and Saudi Arabia in November and December. » 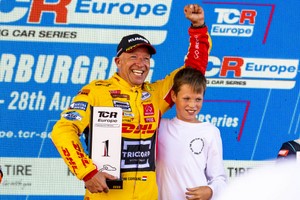 The TCR Europe Series race weekend was a special one, too. In the 33 years he has been involved in motor racing, Coronel has experienced many special situations, but this one was extraordinary, too. After weeks of hot summer weather, it rained in the Eifel region on Friday and that caused dense fog on Saturday that stayed until well into the afternoon. « You really couldn’t see ten metres ahead, » Coronel described the situation. « Very strange, but also something nobody can do anything about, of course. » The time schedule of the event was considerably mixed up and TCR Europe Series qualifying and the race that had been planned for Saturday were cancelled, with just one race held on Sunday. The lap times achieved in the free practice sessions on Friday were used to determine the starting grid positions. This meant that Coronel, who had posted the fastest time of the day in TCR in second free practice, was allowed to start from pole position. « That was nice, of course, but I wasn’t worried too much about the speed anyway as it had already become clear in the free practice sessions that we were nicely on the pace. I would have been somewhere on the first or second row no matter what, » he said. 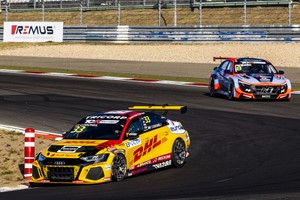 In the race, held late on Sunday afternoon and again in bright sunshine, Coronel took the lead right at the start, built up a comfortable margin and eventually crossed the finish line as the undisputed winner. Coronel reported: « I had a nice start. I was able to pull clear from the rest of the field right away, built up an advantage of a solid two to three seconds and was able to control the pace with relative ease. I was slightly cautious in the chicane because we had incurred some minor suspension damage in the chicane in free practice. 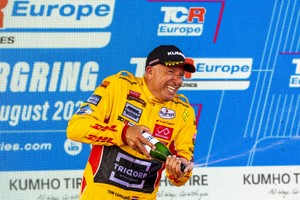 Therefore, I just took a little less risk than normally. All in all, it went seriously well and I was able to win the race with a clear margin, a solid two seconds. I would say that we had a top weekend! And then being able to stand on the podium together with my son Rocco and having him handing over the trophy to me, that was really nice, of course! »

The next TCR Europe Series round will be held at Autodromo Nazionale Monza in Italy from 23rd till 25th September. After that, the season finale will follow at Circuit de Barcelona-Catalunya in Montmeló in Spain from 14th till 16th October.