– Krotov and Halpern on the podium
– Sixth place for Przygonski, eighth for Sanz

The Hail Rally in Saudi Arabia proved to be a good dress rehearsal for X-raid. All four MINI that started the desert race – three MINI JCW Buggy and one MINI ALL4 Racing – ended the final round of the FIA World Cup for Cross-Country-Rallies in the top ten. Denis Krotov and Konstantin Zhiltsov finished a very good second place, ahead of their MINI JCW Buggy team-mates from Argentina, Sebastian Halpern and Bernardo ‘Ronnie’ Graue. Jakub ‘Kuba’ Przygonski (POL) and Timo Gottschalk (GER) finished sixth in another MINI JCW Buggy, while Laia Sanz (ESP) and Maurizio Gerini (ITA) came home eighth in their MINI ALL4 Racing. 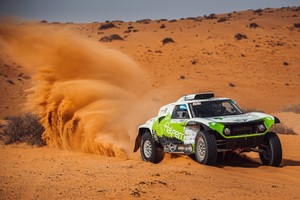 Drivers Krotov and Halpern showed particularly impressive consistency throughout the Hail Rally. They finished in the top five on all four stages and lost very little time at all. This was in contrast to most of their rivals, who encountered problems at least once. As a result, Krotov took finished runner-up for the second rally in a row, having also done so in Kazakhstan. Third place for Sebastian Halpern was his best result of the season.

« We have all learned a lot, » said Halpern at the finish. « We are faster and the team was able to give me some helpful advice on how I can improve. I am delighted with that. It was also good preparation for the Dakar. I had never been here and had no idea what kind of terrain to expect. Ronnie did a great job. Navigation was not easy yesterday and today. » 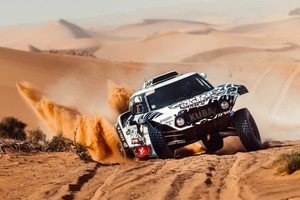 Przygonski and Gottschalk went through an emotional rollercoaster: After finishing third on day one and taking victory on the second stage, they lost almost 40 minutes as a result of a technical issue on day three. That saw them drop to sixth place in the overall standings, and they went on to finish the rally in precisely that position.

« The Hail Rally was very good preparation for the Dakar, as there will definitely be a few stages in this area in January, » said Przygonski. « We tested a few things on the MINI JCW Buggy and now feel better in the car. »

The Hail Rally was only the second outing in a MINI ALL4 Racing for Sanz, and the first rally with her new co-driver Gerini. As a result, the focus was more on preparation for the Dakar than on the actual result. The pair consistently finished in the top ten and ended their dress rehearsal in eighth place overall. 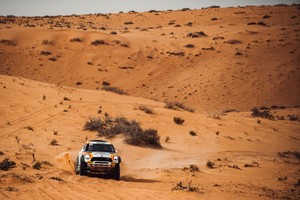