Tom Coronel again managed to score points in the eighth and final race weekend of the FIA WTCR – World Touring Car Cup season. In the final race at Sochi Autodrom in Russia, the Dutch driver with the Audi RS 3 LMS run by Comtoyou DHL Team Audi Sport finished in ninth place, adding another seven points to his tally. He also won, for the seventh time in 16 races, the WTCR Trophy as the prize for the best-placed driver without factory support. In the final drivers’ standings, Coronel is in 16th place, he is runner-up in the Trophy cassification. 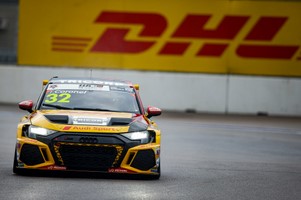 Having had his first experience at circuits like Most and Pau-Arnos earlier this season, Sochi Autodrom also was uncharted territory for Tom Coronel so far. He was impressed by the complex: « What a facility! Really unbelievable! I think I have never seen a circuit as beautiful as this, » said Coronel, who, after over 30 years in racing, is used to quite something. « The hospitality for the teams, the separate rooms for the drivers at the back of the paddock, the circuit itself, the location on the Black Sea coast. Great respect for what has been achieved here. And for WTCR, it seemed to be sort of compensation for Pau-Arnos and Adria, circuits that really are in a different category. » 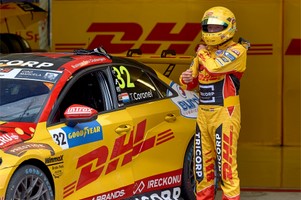 Coronel was reasonably happy with the Russian race weekend. « In first free practice, we were fourth-fastest, even without fresh tyres, but then the rain set in and we were nowhere. We had a lot of problems, even found out that we had made a mistake with the tyre pressure in qualifying, so we were really off the pace. The session is a brief one, of course, only 25 minutes, so we just had two runs. The first run was okay, but for the second run, the track dried out and we were off the pace again, so I couldn’t do any better than 17th place on the grid. »

In the first race, in pouring rain and with poor visibility, it was all about making it through and staying out of trouble for Coronel. « There was more rain than on Friday and Saturday, » he reports. « We opted for a set-up that I also had on the DHL VIP car I used to drive passengers around the circuit in the morning. That worked pretty well, but when rain intensified, it became more difficult again. I did make it to the finish, but that was about it. The second race on the other hand went much better: I had a good start, nicely found my way through. I was able to overtake Gené, I took Tarquini and then also Engstler on the final lap. I was able to keep up quite nicely and I really enjoyed the race, also finishing as the best privateer, so thankfully, another trophy to bring home! » 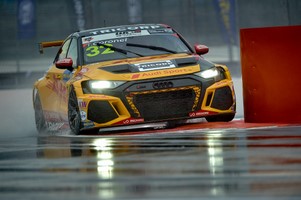 Looking back upon the FIA WTCR season that has now come to an end, Coronel says: « We have scored some good podium results, even the first-ever podium with the new Audi at Aragón. We also had some technical issues that also cost us some points, but after that, we got our feeling back and scored another podium result. Second place at Adria was a strong result, too. And in the TCR Europe Series, we have won races, I ended up fourth in the drivers’ standings, also because I had to miss two races. Otherwise, I could at least have become runner-up. All in all, I have to say that I have a good feeling about the season with Audi, both in the 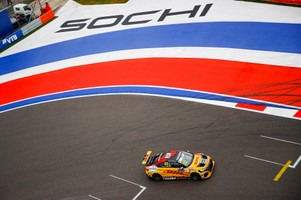 World Cup and in the European series. Thanks also to the Comtoyou team, particularly to Jean-Michael Baert and François Verbist. I am feeling really well within the team and I would like to continue the co-operation. I am already really hot for 2022! First the Dakar rally with the new car and then we will see what the next year will bring. Let’s see whether we can continue the upward trend with Audi because then we can compete at the front next year. And, of course, I would like to thank all the sponsors and partners, too. It has been another great year! »