– Caimi in 2nd and Buhler in 4th position in overall rankings

– Rally shortened to five stages as a precaution against the pandemic

– Hero MotoSports Team Rally completed the third stage of the Silk Way Rally today with all three riders placed inside the top 10 rankings.

Franco Caimi and Sebastian Buhler had a good day finishing in the 3rd and 5th places respectively. Joaquim Rodrigues finished the stage in the 9th position.

Caimi and Buhler were able to tackle the challenging terrain and tricky navigation with solid rides. Caimi appears to be enjoying the difficult conditions in Russia, and is holding on to the second place in the overall standings. A steady ride from Buhler today has moved him up a spot into the 4th position overall.

Joaquim did not have such a good day when a river that he was crossing turned out to be much deeper than expected. The engine of his bike got flooded by the river water, and yet, Joaquim showed the grit of a true hero, getting his bike out of the river, taking it apart to drain the water, and then getting back on the bike to finish the stage.

Today’s stage was to start in Russia and finish in Ulgii in Mongolia. However, due to the deteriorating situation in the country, the organisers decided not to cross the border into Mongolia, instead electing to run the remainder of the stages within Russia. The Silk Way Rally has also been cut short to five stages, instead of the planned 10. 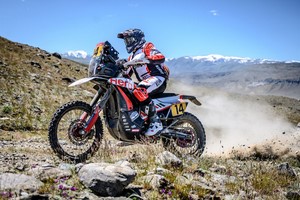 Today’s special section of 133kms started with a climb to a plateau along stony roads with many sharp rocks. After completing the ascent, the remainder of the special consisted of fast stretches along the mountain plateau as well as water crossings across the numerous mountain rivers.

Under the new race schedule, today’s stage became the first leg of the Marathon stage, which means that the riders are now separated from their assistance team and need to carry out any repairs on their vehicles by themselves in the bivouac set up for them in Kosh-Agach.

Tomorrow’s stage will see the riders retrace their steps, riding the same stage as today, back to Gorno-Altaysk, where they will be reunited with their service teams. The rally will then host the 5th and last stage on 6th July, which will be a loop around Gorno-Altaysk, before concluding the event with the Podium ceremonies.

Joaquim Rodrigues, Rider, Hero MotoSports Team Rally: « Today was not a good day for me. Around 80kms into the stage, we had a river crossing, and I did not realize how deep it was. The water was up to my shoulders and the bike fell over, causing the engine and other parts to get flooded. I was able to get the bike out of the water, but I had to take the bike apart to drain the water from the engine. I lost a lot of time because of this, but luckily, I was able to restart the bike and complete the stage. Things are not going my way, but this is racing. I am healthy, and I will keep pushing. »

Franco Caimi, Rider, Hero MotoSports Team Rally: « I am happy to complete the first part of the marathon stage. It was a challenging day with a lot of river crossings and rocks, which made the conditions a little dangerous. But I am happy with my riding and feeling more confident on the bike. I am looking forward to tomorrow’s stage and will keep pushing, trying for the best result possible for myself and the team. »

Sebastian Buhler, Rider, Hero MotoSports Team Rally: « It was a difficult stage today with a lot of tricky navigation. The notes in the roadbook had a lot of details, so I had to navigate very carefully. I was able to stay focused and not make too many mistakes, so overall, it was a good stage for me, and I am happy. » 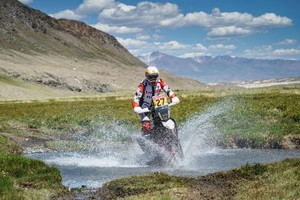