Botswana’s Ross Branch set the fastest time of 1min 26.6sec on the shortened 2.2km super special stage that will determine the starting order for the FIM motorcycles and quads on the opening desert stage of Rally Kazakhstan on Wednesday morning.

As the cars and trucks running on round two of the FIA World Cup for Cross-Country Rallies sat out the afternoon’s opening action, the world’s leading cross-country riders took centre stage for their first taste of rallying in Kazakhstan and the Monster Energy Yamaha factory rider beat the GasGas Team’s new signing Daniel Sanders by four-tenths of a second through the sandy special. 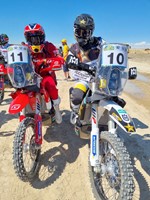 Austria’s Matthias Walkner was third at the start of this opening round of the FIM Cross-Country Rally World Cup, but strategy was firmly in play and, with no rider having any previous knowledge of what to expect across the vast south-western Kazakh deserts, several riders were happy to play a patient waiting game before beginning their serious challenge from Wednesday morning.

KTM’s Sam Sunderland came home eighth. He said: « It’s really cool for me to be here in a new country and see what they have to offer in terms of the desert. A little bit tired after the travelling days and will sleep well, for sure, but I am looking forward to the days to come. »

Seventh-placed Frenchman Adrien van Beveren added: « This is a great opportunity to discover a new desert and a new country. I cannot wait to race again. We had some bad moments in the Dakar but we are working hard with the team to make it better. » 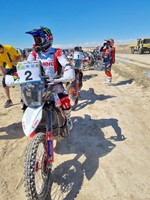 An upbeat Rodolfo Guilliolo made the journey from Guatamala to compete in central Asia. He finished fourth in the quads and said: Guatamala to Kazakhstan is a very long way. « I actually travelled for two days. I took four planes and I was able to come here and I am pleasantly surprised what I have seen. I have hired a local assistance and they have been great. I have known them for 48 hours and they have helped with the quad and other things like having a local cell phone, buying groceries and things. I took a small test in the dunes and it looks similar to Peru, where I used to live. »

Several teams took time away from the administration and technical formalities to carry out testing with their equipment. Saudi Arabia’s Yazeed Al-Rajhi won the rally in a MINI John Cooper Works Rally in 2018 and he was one of the drivers to take an opportunity to shakedown his Overdrive Toyota, alongside members of the X-raid Team and South Racing and Monster Energy Can-Am operations.

Can-Am driver Austin Jones leads the FIA T4 category by nine points and has made the trip from Arizona. « It’s my first time here. I made the very long journey from the USA. It took about 55 hours with very little sleep. It was a crazy journey. Two planes in the US and then ended up in Amsterdam, then Warsaw, an 11-hour lay-over in Warsaw and now we are here. It took a little time through the airport, but I am very excited to be here. » 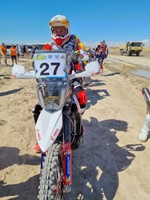 Wednesday
Tomorrow, competitors tackle the first of five punishing selective sections through the south-western deserts. After a liaison of 191.79km to a start near the town of Senek, the first motorcycle will begin the opening timed section of 136.13km at 08.00hrs.

After a refuel for FIM competitors, action resumes to the stage finish after 280.22km with a link of 42.86km taking entrants back to the bivouac in Aktau. 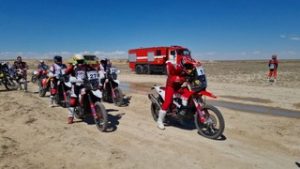