The second stage of the Dakar 2021 was enjoyable from start to finish for Tim and Tom Coronel. Even a navigation error did not spoil the fun. « We wasted 20 minutes on that mistake, » admitted Tom. « But apart from that everything was under control. » 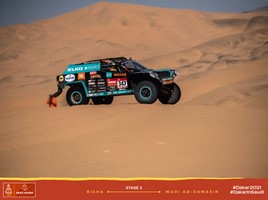 The brothers could certainly have ended a few places up in the classification of the 457 km stage to Wadi Ad-Dawasir, but Tom was not dissatisfied with 39th. « It was just stupid, » he says. « We were in the dust behind the Dakar Speed ​​truck, signalling that we wanted to get past it, so we didn’t pay close attention. I suddenly saw that we were very wrong. We quickly turned around and drove back. Except for that one thing, it was a seriously good day. I am happy. »

It was the only blemish on an otherwise fantastic day, as Tim described it. « A great day. What a wonderful stage. Mountains, valleys, dunes like skyscrapers, hard soil, soft sand: everything was there. The car feels better and better and is doing great. Even in the dunes with 400 litres of petrol on board. That’s hard work for The Beast! »

Tim is gaining more and more confidence in the car and therefore dares to push harder. « We are now 36th in the 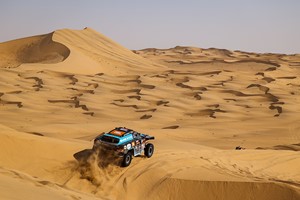 standings, but we also dare to look upwards. The competition is very strong. There’s only big, fat cars – and then us. The outsiders, as usual. »

The fact that things are going so well also gives Tom ‘sense and energy’ to keep going. « If it’s a torture, you wonder what you’re doing it for. That is not at all now. We keep on pushing, but are not out of control for a moment. We’ve had different experiences over the years. It is of course still early in the rally, but we are slowly moving towards the top 20 and I am increasingly confident that we simply belong there. »