Shortly before Christmas Carlos Sainz and Lucas Cruz (both ESP) went into the desert again. In the MINI John Cooper Works Buggy they competed in the Sharqiyah Baja and secured second place. Yasir Seaidan (KSA) and Alexey Kuzmich (RUS) had to retire after a rollover.

Like Stéphane Peterhansel two weeks ago, Carlos Sainz did not focus on the result either. It was more about getting first impressions of the Dakar 2020 host country Saudi Arabia. In contrast to his team-mate Peterhansel, Sainz experienced that heavy rainfall can also occur in the Arab country. Parts of the route had to be adapted. 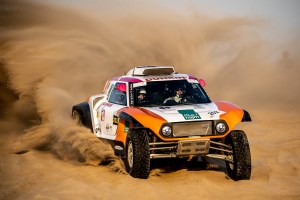 After finishing second in the prologue Sainz and Cruz clinched a victory on Friday. At first they only finished second, but after checking a waypoint the times were adjusted and the MINI JCW Buggy crew took first place. So they started into the third and final stage with a three-second advantage over Yazeed Al-Rajhi in the Toyota. But to be the first to start often brings disadvantages, because you leave a trace to the competitors. So Al-Rajhi was able to make up some time and Sainz finished second with a little more than a minute behind.

Seaidan and Kuzmich unfortunately had no luck at the Baja. They rolled over on day two and had to retire prematurely. 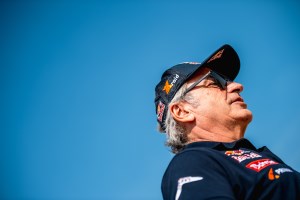 Carlos Sainz: « Basically, I’m satisfied with the past few days. It was good to get a first impression of the country and the temperatures. I took it a bit easier today because I didn’t want to take any risks – after all, we started here in our Dakar racing car. »