Overdrive Racing’s Nasser Saleh Al-Attiyah and French navigator Matthieu Baumel extended their overall advantage to 13min 53sec after a second successive stage win on the timed section of the 2019 Silk Way Rally between Baikalsk and Ulan-Ude in Eastern Siberia on Monday.

The second stage of the revised rally ran for 207.67km in a day’s route of 409.34km between Baikalsk and the night halt in Ulan-Ude. It ran on gravel tracks through a mountain pass, taiga forests and across various bridges and spectacular Siberian terrain to finish on the steppes plateau.

Al-Attiyah said: « I pushed hard on the first stage to gain the advantage, despite the muddy conditions and we found a good pace today and now have a comfortable lead to manage over the coming days. There is a long way to go over many difficult and varied stages. »

But it was a disappointing second stage for the Qatari’s two Overdrive Racing team-mates in their Toyota Hiluxes.

Saudi Arabia’s Yazeed Al-Rajhi and German navigator Dirk von Zitzewitz began the day in third position after a slow puncture cost them a potential second place on Sunday. But the Riyadh driver suffered technical issues on the special and was not able to continue. The Saudi had been running fastest overall at WP1 (52km) before initially stopping on the track for over 15 minutes and then ceding further time as the stage progressed.

Dutchman Erik van Loon has teamed up with Frenchman Sebastien Delaunay for the first time in Russia, but transmission problems thwarted their progress on Monday and they face a fight back through the field over the coming days after losing over two and a half hours to the stage winner after 101km of the stage.

Frenchman Jérôme Pelichet had been running second overall after the opening day and he slipped to third with fellow countryman Matthieu Serradori and China’s Han Wei following closely in the overall car rankings.

Tomorrow (Tuesday) teams tackle a 243km selective section in a route of 691.35km between Ulan-Ude in Eastern Siberia and the Mongolian capital of Ulaanbaatar (formerly known as Ulan Bator).

Ulaanbaatar is the largest city in Mongolia and is located in the central north of the country in the valley of the Tuul River. 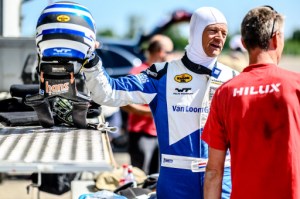