The Lusail-based event is the opening round of a revised FIA World Cup for Cross-Country Rallies that features further long-distance rallies in Abu Dhabi, Turkmenistan, Kazakhstan and Morocco. The T3 category has become the most popular of the three FIA car racing categories (T1, T2 and T3) on the back of the success of the Side-by-Side (SxS) section at the Dakar Rally.

The Qatar event is being organised by the Qatar Motor and Motorcycle Federation (QMMF) and has attracted a provisional 13 entrants in T3.

Al-Zubair and Yorobeyev are running under the AZ Racing Team and Zavidovo Racing Team banners, respectively. The Omani has teamed up with the experienced Qatari navigator Nasser Al-Kuwari on this occasion. The cousin of Porsche Super Cup racer Al-Faisal Al-Zubair, he tackled the event in the National category last year and claimed silverware before switching to his exciting new Can-Am project.

Last weekend, he and navigator Faisal Al-Raisi finished second overall behind Italy’s Michele Cinotto in the T3 category at the Baja Russia Northern Forest Rally, the opening round of the new FIA World Cup for Cross-Country Bajas.

Yorobeyev teams up with fellow countryman Kirill Shubin in the third of the South Racing Can-Am Maverick X3s. The experienced duo finished 15th overall and sixth in T3 in last weekend’s Russian event that used snow-lined forest tracks in the Republic of Karelia, close to the border with Finland. 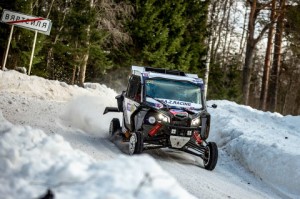 South Racing Can-Am Team’s Scott Abraham, said: « Abdullah and Fedor are looking forward to a cross-country event after coming back from Russia a couple of days ago. Abdullah is running in a full spec 2019 car. This rally is much closer to his home country of Oman. I think his partnership with (Nasser) Al-Kuwari will be a strong team and they will be looking for a good result.

« Fedor and Kirill are an experienced team. They have competed a lot in Russia and have raced for several years in the T3 category. They raced Russia in their own vehicle and this is the first time that they are racing with South Racing Can-Am. We want to bring both cars to the finish and have a good race. »

The Manateq Qatar Cross-Country Rally gets underway with the first of five desert stages of around 102km on February 22.

They will then tackle four selective sections across much of the desert terrain of the State of Qatar on February 23-26 with timed sections of 313km, 338km, 350km and 270km planned – totalling 1,367km – for the remaining four days before the finish on the Pearl-Qatar.

The switch to a date in February for the first time, as opposed to the customary slot in the calendar at the end of April, means that outside temperatures are around 10 or 15°C cooler with crews set to race in temperatures of around 22-25°C.