There is more to off-road rallying than simply the Dakar Rally and the FIA World Cup. Drivers and navigators also pursue their passion in many national championships.

In order to make it easier to reach potential customers and drivers from Spain and Portugal, the MRacing team, with Manuel Russo Jr. at the helm, is operating as a sales partner for the Iberian Peninsula for the German team.

The Portuguese team will also take over operations at local rallies. The personnel will be trained by X-raid, in order to guarantee the best possible preparation of the cars, which are built by X-raid. 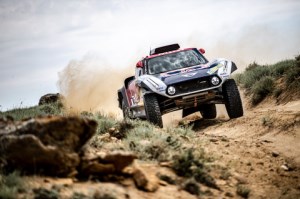 The Portuguese Cross-Country Championship started at the end of March and comprises six events throughout Portugal. The events are similar to the Bajas in the FIA World Cup – they last between two and three days and are significantly shorter than the off-road rallies (Cross Country Rallies). The season finale takes place alongside the Baja Portalegre 500, which also forms the final event of the FIA World Cup for Cross Country Bajas. The Spanish championship also features Baja-style events. Most of the six rallies are two-day events. Round four of the season, the Baja Espana, is held together with the Baja Aragon, an FIA event.

Sven Quandt: « The structure achieved by expanding the distribution network allows us to react faster and in a more customer-focussed manner to sales and distribution demands at national races on the Iberian Peninsula. In Manuel Russo Junior, we have an expert partner on site, who will handle the demand at local races professionally. »

Manuel Russo Jr.: « It is a great honour for MRacing to close this partnership with X-raid. This means our 39 years history and service is well noticed from the worlds leading structure and that make us proud. We will continue to opperate on the most professional way and trying to offer the best service to our customers. »