Taking place over two days, the Dubai International Baja was also the final preparatory event for Aliyyah and her Buggyra ZM Racing team ahead of the Dakar Rally which takes place over 15 days in nearby Saudi Arabia in January.

The title success was shared across the team come the end of the weekend, with Stéphane Duplé picking up the navigators’ title and Buggyra collecting the overall Teams’ crown.

« If you would have asked me before if I expected this result one year ago, I would have said no. This is really unexpected, » said Martin Koloc, Buggyra ZM Racing team principal. « The Dubai International Baja was the last training for the team before the Dakar Rally. We still found some things which need to be done, we are almost there but we need to fix some small things in the team to be perfect for Dakar. But if we summarise the project of Aliyyah and Yasmeen in the past three years, we have had the results, we have built a competitive car, Aliyyah winning the Middle East championship this year, my expectations for Dakar are really high. » 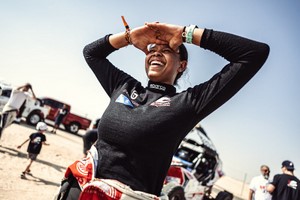 The team entered two cars for the final round of the Middle East Cup in Dubai, with Aliyyah and Stéphane partnered by Téo Calvet and experienced former biker turned navigator Taye Perry.

Leg 1
The opening leg of the Baja was split into two parts, with the first taking competitors from Lisaili to the Al Qudra Desert before heading back to the event headquarters in Festival City. Aliyyah and Stéphane got off to a decent start but found themselves in trouble before the refuelling stop. A further delay there meant they lost more valuable time before a crash near the finish caused considerable damage to the Can-Am DV21 machine.

« It was a long day, » said Aliyyah. « The first part of the stage went really well but we got stuck a little bit before the refuelling, so we lost around six minutes. Then we were waiting a long time in the refuelling because there were a lot of other cars. But the second part went really well, until there was a danger that wasn’t written in the road book, and I was going fast and didn’t see it in time, so the car jumped, and I hit a big rock which damaged the car a lot. »

Aliyyah and Stéphane did, however, get some help from Calvet and Perry who donated some of their spare parts in order to repair the damaged car. 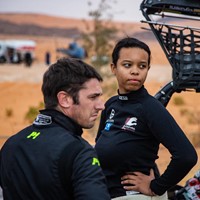 « We had a good, strong stage, and we had really good pace, and then about 40km from the end, we saw Aliyyah and Stéphane and their car was totally destroyed in the crash, so we stopped to help them and give them our parts. We are the back-up crew and only here for the training, » said Téo Calvet.

For Aliyyah and Stéphane, they managed to receive additional help from the Buggyra ZM mechanics and, despite not being able to finish the stage, were able to continue in Saturday’s second stage.

Leg 2
The final day’s action was Friday’s itinerary in reverse, and it proved to be a title-winning day for Aliyyah, who wrapped up the overall and T3 class FIA Middle East Cup for Cross-Country Bajas.

« Today was a good day, we did the same track in reverse more or less and made it to the finish, » Aliyyah commented at the end of the event. « It was a lot of dunes, up and down so I felt a little motion sick! A bit like yesterday but we managed, and we made it to the end, and I am happy with how we did. It was really difficult with the dunes because you don’t see the downhill parts and sometimes it is really steep. » 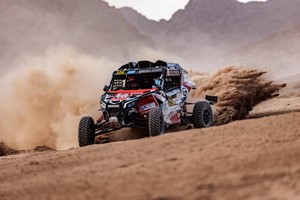 « We expected this result, » added Duplé. « But it wasn’t easy; yesterday we had an issue but today we did a great job with Aliyyah, she drove really well and perfectly. For the championship, we were more nervous here than the other races of course, but we took a lot of points in Qatar and Jordan, so to win the championship it is really great. »

Aliyyah and Stéphane came home 21st in the overall classification and sixth in the T3 category, while Calvet and Perry were just one place behind in 22nd (7th in class).

« We had a small issue before the start, » said Calvet. « But it was okay, we got to the stage on time, but unfortunately, we had another problem on the stage. We had to finish the stage on two-wheel driver which is never easy, especially in the dunes.
« We had a good rhythm, but we had to stop in the end. It’s not the way I wanted to do my first rally, but it is good preparation for the Dakar, it’s better for these things to happen here than on the Dakar. So, this rally was a good preparation for January because we covered a lot of mileage in just two days. » 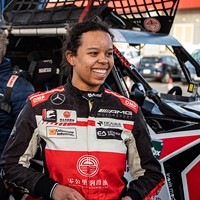 Speaking about Aliyyah’s title and the impact on her hometown of Dubai, Syed Ahmed, CEO of Buggyra UAE said:

« Aliyyah is a Dubai-born girl, and this is her hometown, and she has had tremendous success in the Middle East and in the world. In particular, she is so supportive for the young up-and-coming athletes, especially the girls. The other most important thing is, Aliyyah being a Dubai-born girl, raised in Dubai and then winning the Middle East title in Dubai is a great achievement and a big morale-booster for her. And at the same time, she is looking to do great things at Dakar 2023. »