For the next race weekend of its season, the FIA WTCR – World Touring Car Cup went to Vila Real in Portugal. Following the season opener at Pau in the south of France, this was already the second street circuit on the calendar. Tom Coronel raced the Audi RS 3 LMS run by Belgian outfit, Comtoyou DHL Team Audi Sport. From a sporting perspective, the results weren’t overwhelming: in the first race, all he could achieve was 13th place, also due to a technical issue, in the second race, he was classified twelfth. « With 40 kilograms of additional weight on board due to the good results from the previous round, we knew it was going to be difficult, and it was, » Coronel reported. « However, I massively enjoyed the vibe at Vila Real. That made it a fantastic weekend after all. » 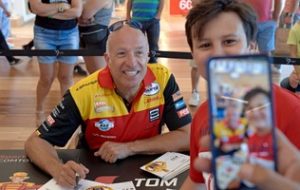 When Coronel heard that there would be promotional activities in the city centre of Vila Real on the Thursday prior to the event, he decided to change his travel itinerary and to fly to Portugal earlier than planned to be able to attend. « Vila Real is always special, they really make a nice spectacle there, so I wanted to be there, » he said. « There are two drivers everyone knows there: Tiago Monteiro, the local hero, and Tom Coronel. Perhaps also because ‘coronel’ is a Portuguese word, meaning ‘colonel’, haha! Most people in Vila Real know me from my victory in 2016 and my crash into the fire truck in 2017. Whenever I just happen to walk into a restaurant there, I have to write my signature on the wall, it happened again last week. »

« The atmosphere there is really special, » Coronel continued. « There was an autograph session with drivers in the main square in the city centre. It was scheduled for half an hour, but we were there for one and a half hour at least because it was so crowded that there was simply no way for us to leave! Everybody was super enthusiastic, the mayor was there and immediately called me to join when an official photo was taken. During the weekend, I took him for a passenger ride on a lap of the circuit during the VIP laps, just like I did with the DHL guests. It was a nice experience. » 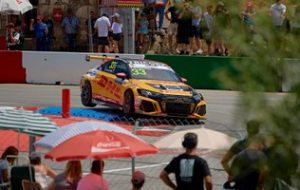 In free practice, Coronel was somewhere around eleventh, twelfth place, but qualifying didn’t go the way he had hoped for. « I locked up under braking once and eventually, I probably was a little bit too cautious, so I ended up 16th on the grid. On a street circuit where overtaking is difficult, you know that getting a good result is difficult like that. Moreover, we noticed that the 40 kilograms after the results from Aragón cost us some two or three tenths per lap, » the driver said. « In the first race, I had a good start, but during the race, an issue on the shifting mechanism occurred, so I had to drive in third gear for the entire lap. I still wanted to make it to the finish to score points, which is what I did. In race two, I had a mega start again, was able to make up a few places, then eventually also overtook Berthon and Magnus and I ended up twelfth. Not great, but sometimes, you have weekends like that. A nice thing was that there were really many fans of mine in one corner, with signs and banners and the like. ‘Coronel corner’. I stopped there during the cool-down lap, so that was a really big party, of course. In terms of atmosphere, it was a great weekend, I enjoyed the vibe. Now, I am looking forward to the next one already, which is the WTCR round at Vallelunga in Italy on 23 and 24 July. »