– Hero MotoSports Team Rally continued its steady run in the Rally Kazakhstan today with a measured performance in Stage 4.

The rider trio of Franco Caimi, Joaquim Rodrigues and Sebastian Buhler finished the stage inside the top 10 to maintain their positions in the overall rankings.

Coming off the back of a strong stage yesterday, Franco started the stage in fourth place and rode at a steady pace. It was Rodrigues, however, who led the charge today, breaking through the pack and registering a sixth-place finish in the stage.

Buhler also had a good stage. The rains during the day made the terrain a bit tricky, but it also meant that he was able to ride close to other riders without being troubled by dust. He finished the day in eighth place.

It was an early start for the riders today with a 100 kms liaison to the start line. The stage ran for 308 kms, opening in a valley with difficult and narrow tracks. The next sections were in the open steppe plains, including tracks following a wadi. This was followed by alternating dunes and sandy tracks, ending with some well-defined tracks, before hitting the 160km liaison back to the bivouac at Aktau. 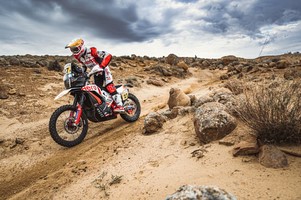 Tomorrow is the final stage of the rally, with 270 kms to be tackled in the Kazakhstan terrain. Stony deserts, wadi crossings, fast tracks, rocky ruts and some technical descents are in store for the riders as they move towards the final finish.

Joaquim Rodrigues, Rider, Hero MotoSports Team Rally: « Today was a better stage for me, it felt more like a Dakar stage. A lot of sandy and technical tracks, they were fast, but not like the last few days, so I was more comfortable. We got a lot of rain today, so I had to be careful at some slippery spots. It was a good stage for me overall, and we have got just one more to go. »

Franco Caimi, Rider, Hero MotoSports Team Rally: « Today was not a very easy stage with different conditions and terrain, made worse by the rain the entire day. I am not completely used to riding the bike in the sand, but I had fun. Overall, it was a nice stage and I’m looking forward to bringing the rally to a close tomorrow. »

Sebastian Buhler, Rider, Hero MotoSports Team Rally: « Today was a hard stage because we had a lot of rain throughout. Still, it was nice to be able to ride close to the other riders without having to worry about the dust. So, it was a very different stage, but I enjoyed it. » 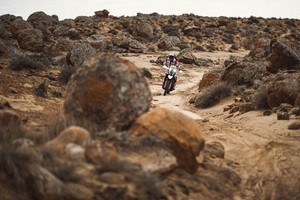