Qatari driver holds off the challenge of Carlos Sainz to claim victory.

Nasser Al-Attiyah and his French co-driver Mathieu Baumel charged to victory in the opening round of the 2021 FIA World Cup for Cross-Country-Rallies, successfully defending their Rally Andalucía title in the process. Here is all you need to know: 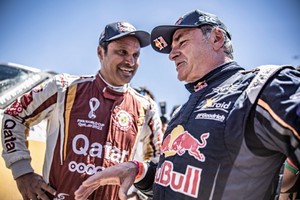 – Three-time Dakar Rally winner Al-Attiyah, behind the wheel of his Toyota Hilux, roared away from the start line to win the prologue and the opening stage, establishing a lead that he held until the chequered flag in Spain.

– « We had fun this week and to get another win here feels great, » said Al-Attiyah. « We enjoyed the landscape and also fighting with our rivals. From the very start we were here to defend our title from last year. Carlos is one of the best drivers out there so it’s always good to have the chance to race against him. »

– Claiming a T1 car class runners-up result on home soil was three-time Dakar winner Carlos Sainz. The Spaniard, behind the wheel of a 4×4 MINI John Cooper Works Rally car, showed his customary coolness under pressure while pushing Al-Attiya all the way.

– Laia Sanz was also making her rally-raid debut in the car class after finishing the last 11 editions of the Dakar as the top placed female biker. Despite a tricky prologue, The Spaniard showed great speed over the 1,000 kilometres of timed special stages to place 7th overall.

– She said: « I think I’ve improved a lot as a driver this week. I feel a big difference between the first stage and today. » 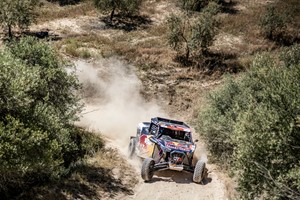 – In the T3 race, the Red Bull Off-Road Junior Team dominated proceedings, setting the fastest time in their class throughout the rally. There were also stage wins for Guillaume de Mevius and 18-year-old Seth Quintero.

– The first-ever overall win for the Red Bull Off-Road Junior Team was claimed by Cristina Gutiérrez. The Spanish native showed consistent pace to place in the Top 3 in her class on every stage of the rally.

– Gutiérrez said: « Finally we have won our category and it feels incredible. I hope we can do it again in the next race. The final stage was very stressful. I was pushing and pushing to get this win. » 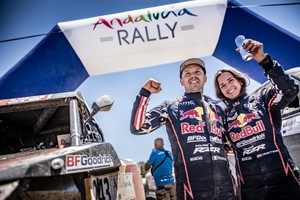 – Gutiérrez’s remarkable speed at the wheel of the OT3 saw her finish between the T1 machines of Ekström and Sanz in the final overall times, while the victory puts her top of the T3 standings of the 2021 FIA World Cup for Cross-Country-Rallies.

– Rally Andalucía was round one of the seven-round 2021 FIA World Cup for Cross-Country-Rallies. Next up is Rally Kazakhstan which runs from June 7-13.