South Racing-built Can-Ams filled the top five places in the Andalucia Rally, round one of the 2021 FIA World Cup for Cross-Country Rallies. Outright victory fell to the American racer Austin Jones and his Brazilian navigator Gustavo Gugelmin in their Monster Energy Can-Am Maverick XRS.

Jones became embroiled in a gripping tussle over the varied southern Spanish terrain with Qatar’s Khalifa Saleh Al-Attiyah and his experienced French co-driver Xavier Panseri. Al-Attiyah led midway through the rally, but Jones hit back over the last two days to secure the win and Al-Attiyah finished second in his South Racing Can-Am Team Maverick.

Jones said: « The last stage was really good. It was technical. I took a long time to get through the first 100km. It was a fun stage, really challenging. The water crossings are something else out here. Full tsunami every single time…. The course was really good and we are super happy. » 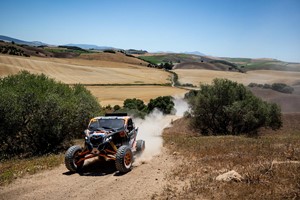 The Dutch duo of Kees Koolen and Mirjam Pol crewed their South Racing Can-Am to the final place on the podium. Chile’s Hernan Garces and Juan Pablo Latrach were fourth in their Maverick and Argentina’s David Zille and Bruno Jacomy rounded off the top five for the South Racing Can-Am Team.

Lucas Del Rio and Marcello Scola crewed a second all-Chilean Can-Am to ninth place in the FIA T4 category. Andre Thewessen and Stijn Bastings ran a South Racing Can-Am for the first time and completed the event in 13th. A first day crash wrecked Aron Domzala’s chances of winning the event, but the Pole recovered strongly to set three impressive stage times on his way to 14th.

The Spanish pairing of Fernando Alvarez and Antonio Garcia crewed the only South Racing Can-Am XRS entered in the FIA T3 category. They reached the finish in fifth place, in a category won by Spain’s Cristina Gutierrez.

Action got underway with an eight-kilometre qualifying stage to determine the starting order for the first of four off-road legs. Domzala started well in his Monster Energy Can-Am to hold 11th overall and first in the FIA T4 category. Al-Attiyah was the fastest of the South Racing Team cars, nine seconds adrift, and Austin Jones came home in third. 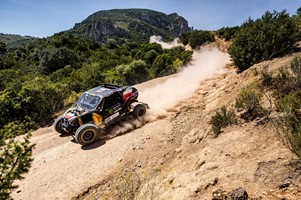 Leg one consisted of three sections that totalled 196km (67km, 73km and 56km) with a neutralisation section after the first two parts, as the route looped around the remote countryside from the Villamartin base. Much of the route was used at the inaugural Andalucia Rally last autumn.

Rally officials stopped the stage for security reasons after 177km, but it failed to prevent Al-Attiyah claiming the fastest time in T4 and an outright lead of 40 seconds. On a stage where Domzala crashed out in his Monster Energy Can-Am after 20km, Jones finished third and Zille, Garces, Koolen and Del Rio were fourth, fifth, sixth and seventh.

The second leg included two more technical selective sections of 150km and 130km and headed into the Province of Cordoba. Al-Attiyah again prevailed in the South Racing Can-Am to win the stage and extend his category advantage. With his Maverick repaired after the crash on day one, Domzala came home in second place with Jones in third.

In the overall standings, Koolen moved up to third and Garces and Zille were fifth and sixth. Del Rio, Thewessen and Domzala were 10th, 18th and 19th. 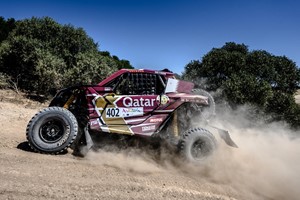 The 298km third stage was divided into two sections by a two-kilometre neutralisation link and crossed rolling plains. Jones pushed hard to claim the stage win and moved in front of Al-Attiyah in the T4 standings. The Qatari rolled his Can-Am gently in front of a number of spectators, lost a little time and trailed the American by 1min 31sec at the end of the day.

Domzala was second quickest on the day, but well behind in the rankings after his day one delays and Koolen, Garces and Zille held third, fourth and sixth places.

The final leg offered two stages of 103km and 73km and Jones attacked the tricky water crossings and demanding terrain to set the fastest time, the American beating Domzala by 32 seconds to claim the stage win and outright victory in the FIA T4 category. Al-Attiyah held on to second place and Koolen rounded off the podium places.

South Racing Can-Am Team’s Scott Abraham said: « This was another great race for the team, dominating the top positions at the Andalucia Rally. It was a perfect way to kick off the 2021 Cross-Country World Cup after our successful tour of the Middle East and the Baja World Cup.
« Good points for Khalifa and Kees, who are focusing on the 2021 Cross-Country World Cup. It is definitely a busy time for the team. We only have a very short time to turn the cars around before they head off to Kazakhstan and the 12-day journey to Aktau. » 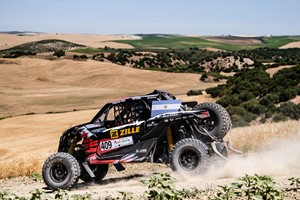 Meanwhile, South Racing also won the T4 category at Baja TT Montes Alentejanos, the opening round of the Portuguese TT Championship, this weekend with driver Gualter Barros in his Can-Am Maverick X3 with co-driver Francisco Esperto.

Alexandre and João Pedro Ré suffered technical issues on the first day and were sidelined as a result. The second round of the series takes place in the Algarve in two weeks’ time. 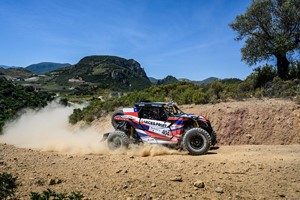