It was an intense Porsche v Ferrari battle for honours as Proton Competition overcame the challenge of longtime LMGTE race leader no.83 Kessel Racing to take victory at the European Le Mans Series 4 Hours of Silverstone.

The hotly contested LMGTE class saw both Kessel Racing Ferraris challenge for class victory throughout the competitive 4-hour race. A series of safety cars and a clever tyre strategy put Proton Competition back within touching distance of the leading Ferrari before the crucial lead overtake was made with only an hour left in the race.

Dunlop’s tyre adaptability
In a race that warranted the use of all the tyre compounds, Dunlop’s wet, intermediate tyre and A and C dry spec tyres showed durability and consistency across all conditions in both LMP2 and LMGTE.

On a drying track, the Dunlop teams were able to utilise the incredibly durable intermediate tyre which can still provide grip on an almost bone dry track. As the majority of the race was dry, teams decided the mix the A and C spec tyre, with some teams choosing to mix the tyre specifications front and rear depending on car setup and driver preference. » 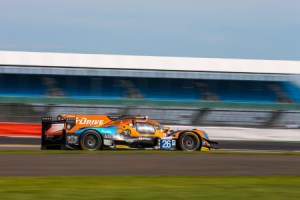 G-Drive scores a podium finish
G-Drive Racing finished in second place in the LMP2 class in the fourth round of the 2019 European Le Mans Series and maintain their position at the top of the LMP2 teams’ standings.

Starting the race on dry tyres, G-Drive saw an opportunity to benefit from Dunlop’s durable wet and intermediate tyres as the rain began to fall. Designed to cope with light rain and a drying track the intermediate tyre allowed drivers Roman Rusinov, former F1-driver Jean-Eric Vergne and Job Van Uitert to maximise the potential of the car in damp and drying conditions.

G-Drive now leads the LMP2 team standings by nine points with two races left. Having already been on the podium three times from four races, including two wins, G-Drive look to be able to compete at the sharp end of the grid at all circuit layouts.

The next European Le Mans Series race takes place at Spa-Francorchamps on the 22nd of September.