A major test awaits the bikers of the Red Bull KTM Factory Team as they prepare to defend their magnificent Dakar Rally record. The Dakar has moved to Saudi Arabia, but the KTM riders are heading back to South America for an important tune up. The KTM squad will spend all next week battling the dunes of Chile at the perilous Rally Atacama.

The desert region of Copiapó was an integral part of previous editions of the Dakar held in South America. It’s among these dangerous dunes that the 1,200 kilometre route of the 2019 Rally Atacama as been laid.

« I’m really looking forward to the Rally Atacama, I’ve been working so hard to make sure I can be there » – Matthias Walkner, 2018 Dakar Rally champion 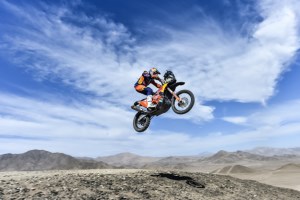 The four riders of the Red Bull KTM Factory Team travelling to Chile to chase glory in the desert are Sam Sunderland (GBR), Matthias Walkner (AUT), Toby Price (AUS) and Luciano Benavides (ARG). All four bikers will be challenging themselves to get the better of the tough terrain as well as the other 22 riders expected on the start line.

The KTM squad heading to Chile have won the last four editions of the Dakar between them: Price in 2016 and 2019, Sunderland in 2017 and Walkner in 2018. Meanwhile, Benavides is the newest recruit to the team and is hoping to make his own mark with a major victory in the near future.

« The goal this year has always been to win the Junior class of the World Championship and so far, it’s going well » – Luciano Benavides

Sunderland and Benavides were in action at the Silk Way Rally in July with the British rider claiming victory and his Argentinian team-mate finishing fifth overall. The win put Sunderland top of the 2019 FIM Cross-Country Rallies World Championship. More precious championship points are on offer at Rally Atacama, the third and penultimate stop of the season.

« I’m coming into round three with a nice little lead, so the plan is to get through the rally safely and make the most of the time on the bike » – Sam Sunderland, 2017 Dakar Rally champion 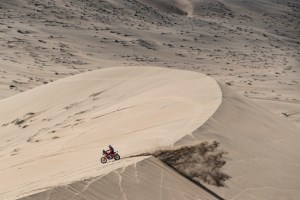 For Price and Walkner the trip to Chile gives the pair the chance to get back on their bikes after significant injury layoffs. Price has spent this year recovering from a wrist injury while Walkner has been battling back from knee and ankle surgery.

« I’m really excited to be back on the bike. My wrist injury has kept me away from rally racing for a bit so I’m keen to get out there and get going » – Toby Price, 2016 & 2019 Dakar Rally champion

Five desert stages await the Red Bull KTM Factory Team bikers in South America. The route includes dunes, valleys, mountains, dry riverbeds and coastal areas. Stages three and four will combine to make a marathon stage, during which the riders will be denied contact with their engineers and mechanics.

As well as the ultra challenging course, the KTM riders will also be racing against top class opposition. Husqvarna biker Pablo Quintanilla (CHI) knows the region like the back of his hand and has won Rally Atacama an unprecedented five times. 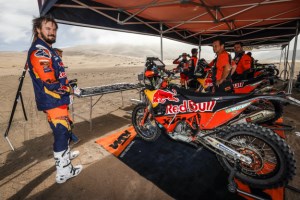 The Red Bull KTM Factory Team have 18 consecutive Dakar Rally wins, but are yet to win Rally Atacama. They have a determined squad of four bikers ready to change that statistic in Chile next week… before switching focus to claiming that 19th Dakar win.

Quotes
Sam Sunderland: « I’m hoping for a good run in Chile this year. I clipped my foot on a rock last year on day four, so that wasn’t too good. Hopefully I’ll have a bit more luck this time. I’m coming into round three with a nice little lead, so the plan is to get through the rally safely and make the most of the time on the bike. There are a lot of Chilean guys who ride really well and there is a certain amount of home advantage as a lot of the tracks we cover are the same every year. Training has been going well – I jumped straight back into it after Silk Way and spent some time in Spain recently working on my roadbook skills, too. I need to stay focused but as always the goal is to get through the rally safely and hopefully pick up some good points for the championship. » 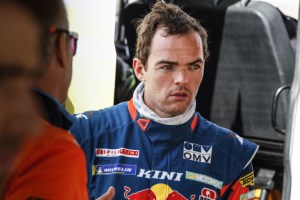 Matthias Walkner: « I’ve spend the last six months recovering from injury, and it’s been a really long journey. It’s such a long time to be off the bike. My knee surgery went pretty well, but my ankle was pretty badly destroyed. It’s still a bit painful but it gets better from month to month. I’ve been rehabbing for 24 weeks now. Now I’m back on the bike I can feel myself getting stronger all the time. The goal is to be completely recovered by the time we get to the Dakar next January. The thing I most enjoy is racing on my bike so I’ve been working towards getting back to that. I’m really looking forward to the Rally Atacama, I’ve been working so hard to make sure I can be there. I’m expecting a really nice rally, the Atacama Desert is such a cool place to go racing. I hope to see again the violet flowers in the desert which is something I’ve been lucky enough to see on previous visits to the region. »

Toby Price: « I’m really excited to be back on the bike. My wrist injury has kept me away from rally racing for a bit so I’m keen to get out there and get going. I finished Dakar with the injured wrist and recovery has taken a bit longer than expected. It was a brutal injury, the scaphoid is an interesting bone to break and it takes time to sort out. It’s been a frustrating time but it’s all fixed up now though and I’m ready to get back into the races. I’ve been doing some four-wheel racing and that helps even though it’s a different discipline and doesn’t look the same. It’s keeps my reflexes sharp and I’m always looking to improve my racecraft. I’d love to race the Dakar on four wheels in the future, but first I’ve got some unfinished business to do on two wheels. I want to win one or two Dakars on the bike before thinking about moving on. » 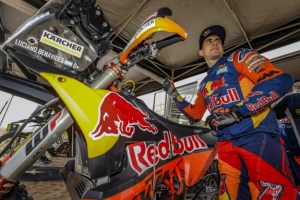 Luciano Benavides: « Since the Silk Way Rally I have been training a lot – working on my navigation and trying to find a good rhythm on the bike. I’m feeling really good in myself and I’m looking forward to the race in Chile. We’re past the halfway point of the season now and so this is a really important race in terms of the championship. We know the Atacama can be a very demanding race and often the navigation is tough with a lot of sections that can catch you out, so the plan is to get through it safely, hopefully with a strong result. The goal this year has always been to win the Junior class of the World Championship and so far, it’s going well. I’m leading on points with two races left to go and a good race in Chile will really help my chances. »