221 competitors of more than 27 nationalities completed p today for the start of the 36th edition of the Baja Aragón, being held from 25-27 July, in the high-altitude town of Teruel in the Aragon region of Spain. The 2019 edition counts for the fourth round of the series for the FIM World Cup for bikes and quads.

With the administrative checks done and scrutiny completed successfully today, Hero MotoSports Team Rally is all set to take the start for the two day BAJA Aragon Rally. The rider duties for Hero MotoSports Team Rally in this rally will be led by the Portuguese star Joaquim Rodrigues, and Indian ace, C S Santosh. BAJA Aragon, will give the opportunity and the much needed race time to Joaquim and Santosh. For Joaquim, his last appearance was in the Merzouga Rally, where he had a commendable 4th place finish, while C S Santosh was last seen in action in his home ground, at the Desert Storm Rally, where he had delivered a podium finish for the team. Coming on the back of such strong performances and intense training sessions, both these riders are eager to race and will be looking to deliver another good rally for the team, after a highly successful debut by their teammates at the Silkway Rally earlier this month. 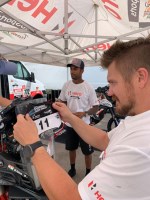 The BAJA Aragon Rally is expected to test the competitors with a combination of dust, the heat, and the rocky and stony clay, bringing out the best of man and machine in an impressive test of skills under the tricky conditions of a fierce environment. It will tackle a total distance of almost 1000 kms with more than 500 kilometres of it in four special stages, divided into two days of racing, on Friday and Saturday.

Mr. Wolfgang Fischer, Team Manager and Head of Hero MotoSports Team Rally: « It has been an exciting and action packed month for the team with two good back to back races, the Silkway Rally earlier and now BAJA Aragon. We had a good outcome at the Silkway Rally with Paulo and Mena performing really well, and now the spotlight shifts to Joaquim and Santosh, in the BAJA Aragon Rally. We are hoping for another good race and experience for our riders in this race. It is always a good omen for the team to see that the riders are now stepping up their game and looking to improve on their rankings. As a team, we had defined our vision to become one of the top contenders in the sport and I am quite happy to say that with this nice combination of experience and speed in the team, we are well poised to start delivering on that vision. »

Joaquim Rodrigues (Comp No: 7): « I am quite happy to be racing here at the BAJA Aragon rally. I had a good start to this new season with the Merzouga Rally and I am looking to deliver another good race for the team. We have done some good preparations coming into this rally and now it’s time to put it into practice in the next two days. »

C S Santosh (Comp No: 11): « Spain is like a second home to me as I come here to train quite frequently so BAJA Aragon is a race that I really look forward to compete in. My focus for this year is on increasing my speed so that’s what I will continue to build on, with each race. I had a good outing last time I was here and I will be looking to put in a good performance this time around as well. »