Qualifying gave him plenty of reason to be optimistic. Everything went according to plan and the chosen strategy resulted into tenth place on the grid for race one and pole position for race two. Enough reason to be confident going into the race on Saturday. The Dutchman was on the fifth row with his car in yellow DHL livery and as the lights went out, he opted for the space along the wall to move up a position in the international 36-car field. In the hectic opening stages, he frequently had to avoid and outbrake other competitors. Halfway through the race, the safety car was deployed with five minutes plus one lap remaining at the restart. Tom still firmly held on to ninth place until Homola started the fight with him in the final stages. Both cars tangled, resulting into a broken steering column on the Honda and therefore retirement with less than two minutes to go.

On Sunday, everything looked set for the second race, the eighth of the season with Tom Coronel’s Honda on pole position. Although the track was dry as the cars lined up on the grid, race control declared the competition a wet race. With Morbidelli alongside, the Dutchman led the field into the first corner. Behind him, several drivers made contact and retired with damage. That resulted into an early safety car intervention. At that stage in the race, rain set in as well, with the majority of the field on slicks. 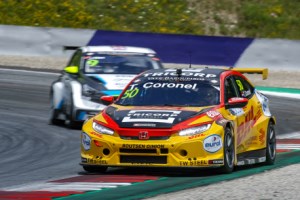 The Dutchman again benefited and extended his lead. With around five minutes remaining, the safety car was deployed again. At the same time, race control also announced that the race leader had to come in for a drive-through penalty because work had been done on the Honda prior to the race at a time when this wasn’t allowed. The team instructed the driver to continue as it intended to protest against the decision. As a result, he remained in the lead as rain increased. With a little over a lap remaining, it was more and more difficult to keep the Honda on track. Tom Coronel didn’t give up while others were battling with each other. Having led almost throughout the race, Tom Coronel was third across the finish line, but then had this position taken away as the stewards held on to their decision and imposed a 30-second time penalty.

« This is really sad, of course, » Tom Coronel started his story. « In the practice sessions, we were absolutely on the pace and got it exactly right with tenth and first place on the grid. Partly, we achieved this by alternating with used and new tyres. In the first race, things went well. I had a good start and was able to fight with the drivers around me. It was all about making it to the finish without any damage and scoring some points. That went well for a long time until I hit the rear of Homola’s car with the front of my car, breaking my steering column. As a result, the race was over with barely a lap to go. Fortunately, damage was limited and therefore could be repaired in time. 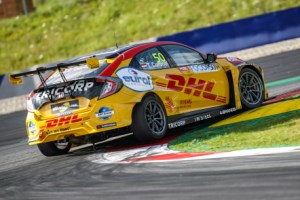 At the start of race two, I had the best getaway, quickly pulled a gap and I also remained in the lead after the safety car interventions. Then it is quite strange to be told about getting a drive-through only towards the end of the race. Apparently, people still had been working on my car after the five-minute signal. The team protested immediately and told me to stay out on track and to continue. That was what I did and I led for more than 95 percent of the race. Sometimes, I had to use all the track space in wide powerslides as the tyres degraded and the track became more and more slippery. Still, I was third across the line, only to get 30 seconds added to my time. Really annoying! The good news was that we were absolutely on the pace and were able to keep up. That gives us confidence for the next races at Oschersleben! »