The Portuguese ace, who faced a huge battle to return to racing after sustaining serious injuries in an accident in 2017, and made his full-time comeback earlier this year, also made KCMG the first Asian team to win in the WTCR.

Tiago qualified a season’s-best second for the Race Three grid, passed his pole-sitting team-mate Attila Tassi when the Hungarian suffered a misfire on lap three, and resisted initial pressure to pull away to a commanding three-second victory.

His win was the sixth of the season for the Honda Civic Type R TCR in the WTCR, and followed a 10th-place finish from Race Two’s partially-reversed grid.

Attila, who had led an all-KCMG one-two in qualifying to claim his first WTCR podium, led until suffering a faulty spark plug, which caused his retirement. He finished 11th in Race Two.

ALL-INKL.COM Münnich Motorsport’s Esteban Guerrieri increased his lead in the Drivers’ Championship with a hard-fought third place in Race Two. 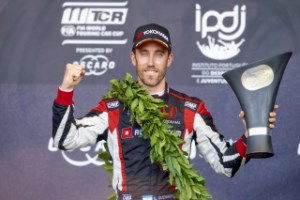 Having qualified ninth, he started second on the partially-reversed grid, but lost a position after taking his joker lap early and being blocked by Nicky Catsburg for most of the race.

Catsburg, whose team-mate is Esteban’s main challenger for the title, then made contact with him on the opening lap of Race Three. That broke Esteban’s left-rear wheel and put him out.

Nestor Girolami, who qualified 11th for both races, scored vital points in ninth and seventh; results that keep him right in the hunt for second place in the championship.

Münnich’s lead in the Teams’ Championship stands at 73 points with four triple-header events remaining while Esteban is 25 clear in the Drivers’ standings.

Tiago Monteiro #18 – KCMG : « It felt incredible to be up there on the podium for the first time in the WTCR and get my first win in this series since my accident. I’d have been happy with a podium in this race behind Attila, but he had an issue so someone is obviously looking out for me here. There were so many doubts about whether I’d be able to come back after my injuries, and the season has been very hard, so today is incredibly special. The effort from everybody involved in this KCMG project has been incredible and the support from the fans here in Portugal has been amazing. I dedicate this victory to the mechanic from Cyan Racing who passed away last night. » 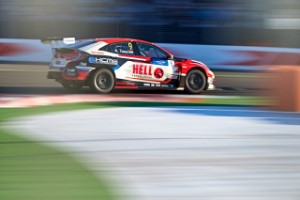 Attila Tassi #9 – KCMG : « I leave here with very mixed feelings. I’m incredibly proud to have my first pole position – and at a circuit I’ve never been to before – but I’m sure I had the pace to win, and it’s frustrating that my car developed an issue at the start of Race Three that stopped that happening. We’d put ourselves in a good position too after managing Race Two and making sure we avoided problems. Still, it’s great to see Tiago winning his home race and I think that after the performance here, we can set higher targets for the rest of the season. »

Esteban Guerrieri #86 – ALL-INKL.COM Münnich Motorsport : « It’s a bittersweet day. I woke up to the terrible news of our friends at Cyan Racing losing a team member and my thoughts are with them at this difficult time. We were very focused today on making the top 10 in qualifying. We achieved this after making a good improvement with the car overnight. I drove my socks off in qualifying, got the chance with the front row of the reversed grid and made a good podium in third. I think everyone saw what happened in Race Three with [Nicky] Catsburg, so there’s nothing for me to say on that. I’m pleased to increase my championship lead today. » 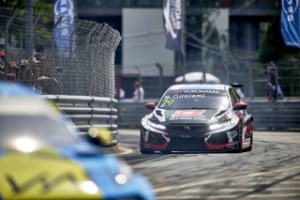 Nestor Girolami #29 – ALL-INKL.COM Münnich Motorsport : « It’s been a good day in terms of the races, because after qualifying 11th, I was in a situation where I just had to take as many position gains as I could. It wasn’t a perfect day. Q1 was good, but because of the red flags I wasn’t able to get a good lap early in Q2 so I had to put a safe time in later. I could see that Esteban was eighth or ninth, so I was conscious that I didn’t want to cost him the reversed-grid pole by knocking him out of the top 10. I aimed to try and get the 10th position, but I just missed it. I still think it was a good strategy because our aim is to make sure that a driver in a Honda wins this championship. »

Dario d’Esposito – Team Principal KCMG : « Today is an incredible day, something I think we all needed after the sad news about the Cyan Racing mechanic overnight. Tiago’s win is incredibly special. I was with him in the hospital when he had his accident and I know what he’s gone through to get back to here. It couldn’t have happened at a better place than his home circuit. I’m so sorry for Atti, who was the fastest driver of all today and dominated qualifying. It’s frustrating for him to have the spark plug problem, but he’s shown what he can do and will aim to show more of this form in the final few events. I’m so proud of the whole team this weekend; they’ve done an incredible job. It’s just a shame that China is three months away! »

Dominik Greiner – Team Manager ALL-INKL.COM Münnich Motorsport : « It wasn’t the best weekend for the team, but we’re leading the Drivers’ and Teams’ Championships going into the summer break and this is fantastic news for the guys, who have worked so hard across the whole season to put us in this position. We’ve had some technical issues that have certainly cost us some points this weekend, but we’ve recovered in a very strong manner. We’ve learned a lot from what’s happened this weekend and the target will be to make sure we come to the Asian races even stronger. To be in front is a great motivation for everybody. »

Mads Fischer – TCR Project Leader, JAS Motorsport : « What an incredible day for Tiago, who really deserves this win. He has been a member of the JAS and Honda families since 2012 and we’ve all seen how hard he’s pushed to get back here after his accident. The strong form in both Civic Type R TCR teams is largely down to a new spirit of co-operation between them. There is now transparency between the two and complete data-sharing, which has benefitted all four drivers. The camaraderie between the four is fantastic and they’re all now pushing to try and make sure a Honda Racing driver wins this championship. »