Despite Dunlop’s European Le Mans Series (ELMS) champion team, G-Drive Racing, having LMP2 victory snatched away by a technical issue after 18 hours of hard racing, they had proven to have race-winning pace on Dunlop’s A-specification tyre.

The team had built a half-lap lead over rivals Alpine, with Roman Rusinov, Job van Uitert and Jean-Éric Vergne sharing G-Drive’s Aurus when an electrical issue struck. The team rejoined after losing 20 minutes.

The Le Mans 24h marked the end of the FIA World Endurance Championship (WEC) Super Season. Dunlop tyres were the choice of WEC race winners at six of the eight races in the marathon 2018/2019 season which saw 86 hours of intense racing – the equivalent of three Formula One seasons. 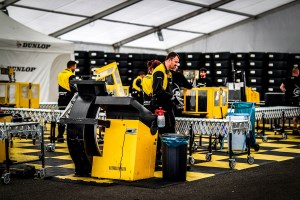 Race Report
In qualifying, five LMP2 cars qualified within one second of pole showing the competitiveness of the only 24h class to feature a battle between different tyre manufacturers. It was Matthieu Vaxivière who started in first position at the wheel of TDS Racing’s Dunlop-equipped #28 ORECA 07.

In front of 250,000 fans, race day started well for Dunlop with Vergne setting a time in the pre-race warm-up session that was more than 1.5 sec faster than the first non-Dunlop car.

In the early stages, the pole-sitting TDS car set the pace, with Vaxivière leading the first stint. After TDS had their first driver change, the next five hours featured a compelling battle between Alpine and G-Drive Racing. Jos Van Uitert, despite a 10 second penalty for a yellow flag infringement, was able to apply pressure to and retake the lead for G-Drive after four hours of hard racing.

G-Drive and TDS had chosen a different tyre strategy to the other Dunlop runners, focusing on the softest A-spec tyre which had proved very competitive for both teams in the 2018 race. FIA World Endurance Championship contenders Jackie Chan DC Racing had a preference for the Sebring-winning C-spec tyre. They showed consistent pace with their two cars moving up the order with the #38 car of Ho-Ping Tung, Gabriel Aubry, Stephane Richelmi placed solidly in a potential podium position by nightfall.

Into the night, G-Drive were able to take advantage of the Dunlop grip in the trickier cooler conditions to build a class lead. Between sunset and sunrise, they relentlessly extended the lead to 90 seconds, with the #38 car a similar distance behind in third place. Then, after a pitstop with less than six hours to run, cruel fortune struck when the car suffered an electrical issue. 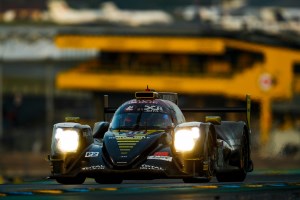 Jackie Chan DC Racing may not have been able to repeat their epic 2017 24h win, but as the Super Season came to an end, they did claim the accolade of winning the most races. With five of the eight races won by the Jota Sport run team, it was an appropriate way to celebrate their tenth consecutive year of working with Dunlop, a milestone that was celebrated with a special logo on their cars.

Sebastien Montet, Dunlop Technology Director, was satisfied with the tyre performance: « For both G-Drive and Jackie Chan DC Racing to perform strongly on two different Dunlop specifications shows the breadth, versatility and consistency across our range. Our latest C-spec tyre, introduced at Sebring, has now proven its pace and durability on a diverse range of tracks including Spa, Monza, Le Castellet and Le Mans, whereas the A-spec set a race winning pace and fastest lap at Le Mans too. »

Ben Crawley, Car Motorsport Director, thanked the Dunlop partner teams for the strong results across the WEC Super Season: « In an intensely competitive season, with a genuine battle of the tyre manufacturers, we are grateful to our teams for choosing Dunlop to win six of the eight races. We’ve pushed hard to help our loyal partners win, bringing a new tyre for Sebring and the final stages of the Super Season. The pace has been proven and our focus is now on helping our teams use this new tyre technology to win in the European Le Mans Series. »

The race didn’t just take place on track. During the event, Dunlop’s team of expert fitters serviced over 1500 tyres at an average rate of 1.25 minutes per tyre.

Dunlop’s ELMS teams will be back in action for the Barcelona night race on Saturday 20th July. In the meantime, the Dunlop crew have another round-the-clock marathon later this week, with the Nurburgring 24h, where a varied mix of GT and Touring car teams have chosen Dunlop to tackle the Nordschleife.