Sacha Fenestraz extended his lead in the Japanese Formula 3 Championship this weekend at Okayama after finishing with one win and two second-place finishes.

The French-Argentinian driver had taken control of the lead of the championship last month at Autopolis, after he had a perfect weekend in difficult conditions and gained the maximum amount of points available.

He got off to a similar start on Saturday in qualifying. While the conditions were dry unlike at Autopolis, Sacha was able to achieve pole position for both race one and race two.

Later in the day the first race took place, with Yoshiaki Katayama starting alongside him. At the start Sacha had a good getaway and kept Katayama behind him but lost the lead to B-Max Racing with Motopark team-mate Enaam Ahmed. However this was due to Ahmed jumping the start, which he was later penalised by the stewards for.

When Ahmed served his drive-through penalty Sacha retook the lead of the race, he was able to create a sizeable gap to Katayama behind who was battling with other drivers around him. 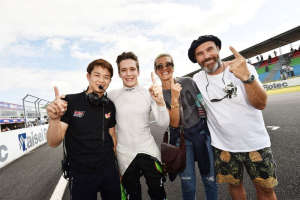 He eventually crossed the line with a gap of nearly 14 seconds to the driver behind, after trading fastest laps with Miyata throughout the race. The victory was his fourth in a row in Japanese F3 and his fifth of the season. It also gave him pole position for the final race of the weekend.

Both races on Sunday started the same way, with Sacha losing the lead at the start to Miyata in race two and Katayama in race three. On both occasions he was able to stay on the tail of the lead driver while also keeping third place at bay.

Race two was briefly disrupted by the safety car, which came in with two laps to go and bunched the field up. The final race of the weekend didn’t include incidents, but Sacha was able to complete a professional drive like in the previous race to finish in second. He also managed to claim the fastest lap in both races.

« It was a bit disappointing not to be able to get the win in race two or three, but at Okayama it is very difficult to overtake during the race, so I focused on keeping second place and getting the fastest lap.

« Overall it was a very positive weekend, as we managed to gain a good amount of points and keep the championship lead to Miyata. A massive thanks to the team for doing an incredible job all weekend. » 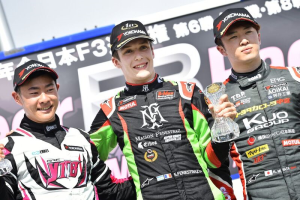 While Miyata and Katayama each won a race, stopping Sacha from getting his sixth win of the season, Sacha obtained more championship points than anyone else. His total of 73 points gives him a healthy 30 point lead to Miyata.

Sacha’s busy schedule continues and is back in action in two weeks time for the fourth round of the Japanese F3 Championship at Spotsland SUGO.