The round of the FIA World Cup for Cross Country Rallies Rally Kazakhstan reached its climax and is close to completion. The fifth leg of the rally made significant changes to the general classification of the race.

Leadership is still with Qatari Nasser Al-Attiyah, and the legendary Frenchman Stephane Peterhansel is now 6 minutes behind the leader before the decisive day.

On the penultimate day of the rally-raid, the riders overcame a 290-kilometer stage. More than half of the selective section were completely new places for Rally Kazakhstan. Already after the 65th kilometer, the steppe roads led the racers to the sandy dunes of the Kyzylkum desert, in which the Kazakhstani route has never taken place. Then began the steppe roads and salt marshes, and at 277 km the route passed through a valley of stones, where there are many wells at which horses and camels graze. 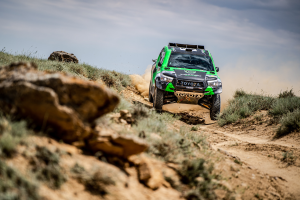 The fastest time of the fifth special stage was won by the crew of Yazeed-Al Rajhi and Dirk von Zitzewitz with a time of 2 hours and 58 minutes. This is the second victory of the team in five stages. If not for the 4-hour penalty for violating the sports regulations at the finish of the third section, the crew could potentially have claimed the first place in the Rally Kazakhstan 2019. Now the crew is only 7th in the overall standings.

French racer Stephane Peterhansel today showed the second best result of the day. Thanks to today’s success, the matrimonial crew of Stephane and Andrea Peteransel rose from fourth to second position and are 5 minutes and 38 second behind the leader Nasser Al Attiyah in the overall standings before the final.

« Yesterday we were in fourth place. Today, of course, there was a strange situation, just three race drivers who were in front of us experienced technical problems. Nasser lost 30 minutes, I suppose others are even more. Now we are second and it is better than we expected. Tomorrow we will try to put pressure on Nasser in the race and see what happens. This is motor sport, so we can say that we have a chance, » said Stephane Peterhansel after the finish.

Today, the Frenchman on the fast smooth roads accelerated as much as possible over the difficult stony tracks and sand dunes and sought to avoid technical breakdowns and punctures, choosing the best route. Thus, many years of experience and timely success helped the crew to finish successfully today.

Czech race driver Miroslav Zapletal in his Hummer H3 Evo VII crossed the finish line third, thereby improving his score in the standings. Now the crew of Miroslav Zapletaland Marek Sikora are in fourth place, but the gap between him and the third place is 45 minutes. The day on the fifth special stage at the silver prize-winner Rally Kazakhstan 2017 and 2018 Jakub Przygonski was extremely unsuccessful. Today, the Pole was closer to victory than ever after Nasser’s car stopped driving. However, the racer’s car fell into a hole and turned over.

« The day was running quite good. Kuba was driving well. At 160 km it was too late to call him of the double danger of the road. And we turned over. Kuba did not have a chance to slow down. Much time passed, and we rode on. Then, we had a problem with the electronics, possibly due to an accident. Spent a lot of time to find what was broken once again. Things happen. We are happy that we managed to finish, »- shared the results of the day the navigator of Jakub Przygonski, Timo Gottschalk.

The day was also terrible for another favorite – the team of Bernhard ten Brinke and Tom Colsoul. The crew broke their Toyota Hilux’s driveshaft and were stuck in the sand dunes. Having corrected the situation, the team pushed on, but one gear was stuck in the car. After they fixed the mechanism, they felt the smell of gasoline and oil. Having lost a total of 1 hour and 50 minutes, the crew did not take risks with the car and decided not to continue the race. 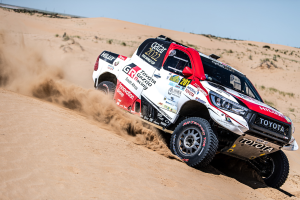 The winner of the Dakar 2019 rally-marathon Nasser Al-Attiyah, acting on the car Toyota Hilux was able to retain its status as a favorite of the event, finishing fourth today. « Not an easy day. After 50 kilometers our car just got stuck and stopped. We did not know the reason. Stood for 45 minutes, then the car started up. Then we were pushing, well drove the rest of the section. Lost a lot of time, but we are at the top of the table and tomorrow we will see what we can do, » said Nasser Al Attiyah after the race.

In the T2 class, the Kazakh crew of Kirill Chernenkov and Alexei Mun won the fifth day of the competition with a result of 4 hours 57 minutes and 49 seconds. Despite this, the Qatari racer Mohhamed Al-Meer leads the standings in this category.

In the T3 class, the fastest time was shown by race car driver Reinaldo Varela from Brazil, who finished with a result of 4 hours 19 minutes and 22 seconds.

In the truck series, once again there was no equal to Dmitry Sotnikov from the Russian Kamaz Master team, his crew covered the fifth day’s distance in 3 hours 32 minutes and 9 seconds. 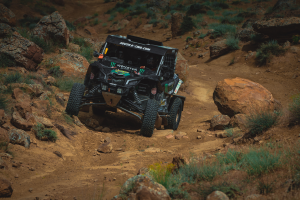 On June 1, in the final day, riders will pass the shortest 149 km selective section, which will pass north of the city of Aktau and end with a picturesque ride along the coastline of the Caspian Sea.