Timing his one new-tyre run to perfection on the rapidly-drying track surface, he ended Q2 second.

Compromised by the maximum 60kg compensation weight applied to all Civic Type R TCRs as a result of their success at the opening two rounds, he slipped to fourth in Q3’s pole-position shoot-out on a track that was virtually dry.

In the earlier session, which had decided the grid for the opening race of the weekend on Sunday morning, Esteban and Bebu qualified eighth and 11th. 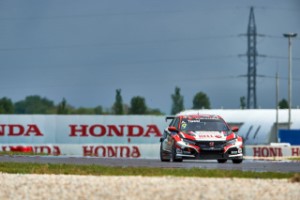 Like the Münnich pair, KCMG drivers Tiago Monteiro and Attila Tassi were heavily affected by carrying the maximum compensation weight, which made all the Civic Type R TCRs 90kg heavier than the lightest car in the field.

Tiago and Attila qualified 21st and 23rd in the first session, but were confident of improving their positions when the rain fell one hour before the all-important multi-stage session later on.

Having gone to the top of the timesheets with five minutes to go, Attila looked set to progress to Q2 for the first time in 2019.

However, a decision not to fit new tyres at the end of the session left him unable to improve and as others completed their final laps, he fell to 21st. Tiago, affected by briefly driving off the circuit on his first flying lap on new slicks, did likewise and qualified 24th.

Nestor Girolami #29 – ALL-INKL.COM Münnich Motorsport : « We knew that the compensation weight was going to challenge us today, but we’ve done a good job. I’ve been around 10th place all day in practice and qualifying and having the front-row position for Race Two is a huge achievement, even if it’s something you can never plan for because the times are so close. We didn’t do many laps in qualifying and managed to time the one lap in Q2 very well. Whether it’s wet or dry on race day, we’re on course to score the number of points we’re targeting and stay ahead in the championship. » 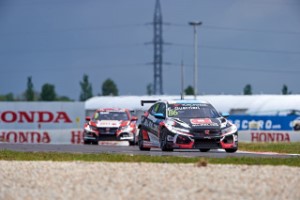 Esteban Guerrieri #86 – ALL-INKL.COM Münnich Motorsport : « I’m pretty happy with fifth place overall in second qualifying. It’s probably better to be first or second or ninth or 10th, because then you have a good chance of scoring big points in at least one of the later races, but in practice we looked likely to be about eighth, so in the tricky conditions in qualifying, we probably did a little bit better than we were expecting. Sunday will be a big fight in all three races because I start eighth, sixth and fifth and if it’s wet, as we’re expecting, we could have a repeat of the kind of action in Hungary. »

Attila Tassi #9 – KCMG : « There are some positives to take from today, despite the position we’re in. If you compare the gap to pole position from Hungaroring and here, we’re closer and it’s a longer circuit, so that’s a significant improvement. I felt in the wet session that Q2 was possible, but we made a strategic decision not to change tyres at the end because a small delay would have left us out of time, but instead I finished my last lap maybe one minute earlier than some other drivers and didn’t benefit from the circuit being at its peak.
I hope it rains on Sunday because in the slippery conditions today and in the races in Hungary, I was fast and I know I can go forwards from my starting positions. » 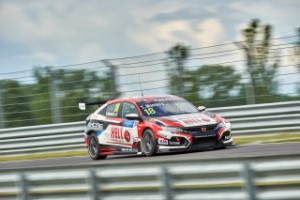 Tiago Monteiro #18 – KCMG : « We’re not a million miles off where we wanted to be, especially as we have the heaviest car here on compensation weight. The position doesn’t look too great, but in the first qualifying we just needed to make a few small adjustments to be in the ballpark. We did these for second qualifying, but it rained so you had to try and maximise your performance in the conditions. I went off on my first lap of the final run, but it probably wouldn’t have been my fastest lap, so I don’t think it cost me too much. I’m not sure what to expect from the races, but the target is definitely to score some points. »