The Arequipa bivouac welcomed back the 2019 Dakar Rally convoy today after a gruelling two-day marathon stage. Competitors across all five categories were left to fend for themselves last night before embarking on this perilous fifth stage. Those making it to the finish line today have earned themselves a Rest Day before the rally’s second week points them back towards Lima.

Sébastien Loeb (FRA) and co-driver Daniel Elena (MON) finished their first week at the 2019 Dakar on a high with a stage win – their second of the race so far. It’s not all been plain sailing for nine-time WRC champion Loeb in the first five stages, but he can enjoy his Rest Day with the podium positions within reach.

« We pushed really hard from the start to the end of the stage, with no mistakes, no punctures, nothing. We had a perfect day. » – Sébastien Loeb

« Seb (Loeb) doesn’t have anything to lose. He needed to go at it, to push and to get back the time. From my side, I need to focus on Stéphane (Peterhansel), because Stéphane will be the danger man here on the Dakar. » – Nasser Al-Attiyah

The latest episode of Dakar Daily covers the fifth stage action from the rally and in the bivouac, watch it on Red Bull TV right now.

There was a stage win for Red Bull KTM Factory Team rider Sam Sunderland (GBR) in the bike race. The 2017 Dakar winner was given back the 10 minutes he spent on the track assisting Paulo Gonçalves (POR) who suffered a race ending accident on today’s stage.

« The first thing to do is give a shout to (Paulo) Gonçalves, it’s a bummer for him. In these kind of moments the race is second. » – Sam Sunderland 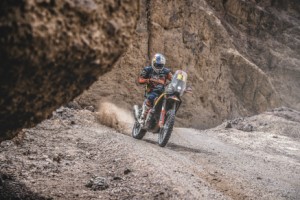 « My ankle is painful, but when the adrenaline takes over on the stage I don’t really notice it. » – Matthias Walkner

Grouped together in the Top 10 on a bike stage from Moquegua to Arequipa were Luciano Benavides (ARG), Stefan Svitko (SVK) and Toby Price (AUS).

“We started in groups of 10 today in rocks, fesh-fesh and dust, that was all a bit crazy. It was so hard to keep an eye on the navigation while trying not to get caught out by anything hidden in the ground.